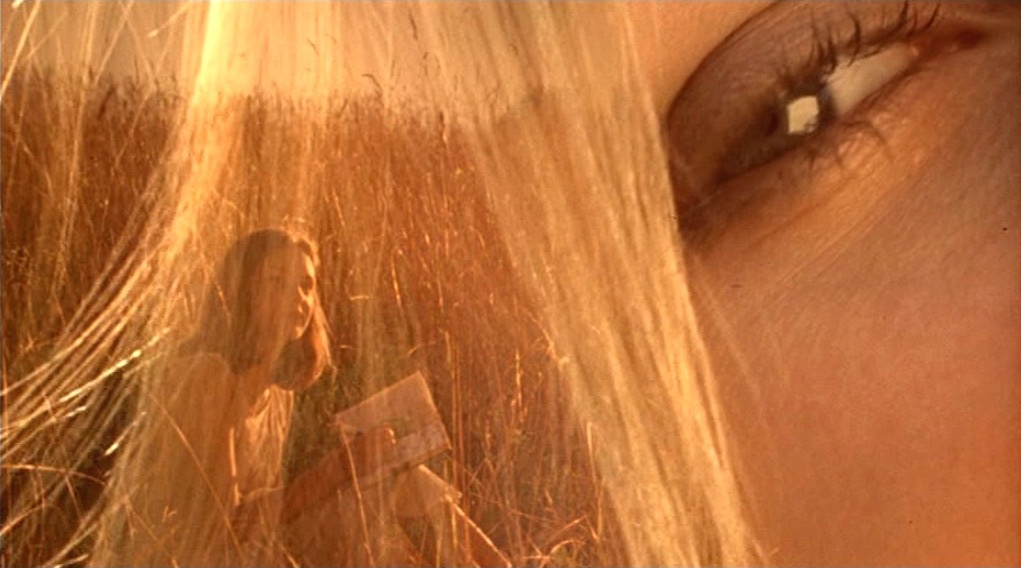 You're probably looking at your keyboard to verify if T is beside Y. Yes, it is. And no, it's not a typo. I use yestertears every time I refer to not-so-happy things in the past, yet here they are crawling their way to the present just to haunt you.

That's what happens to the narrator in The Virgin Suicides, Sofia Coppola's stunning feature film debut. The film tackles the dilemma of angst-ridden adolescence, the downsides of being a girl, teenage sexuality, the anguish of yearning, and — of course — the complexity of suicide.

The sheltered Lisbon sisters become the center of fascination in an upper-middle class suburb somewhere in '70s Michigan. Cecilia Lisbon (Hanna Hall), the youngest, becomes the catalyst of her sisters' gradual descent into despondence. A tripster named Trip Fontaine (Josh Hartnett) also plays a key role in aggravating the sisters' fragility when he pursues the second youngest, Lux (Kirsten Dunst). 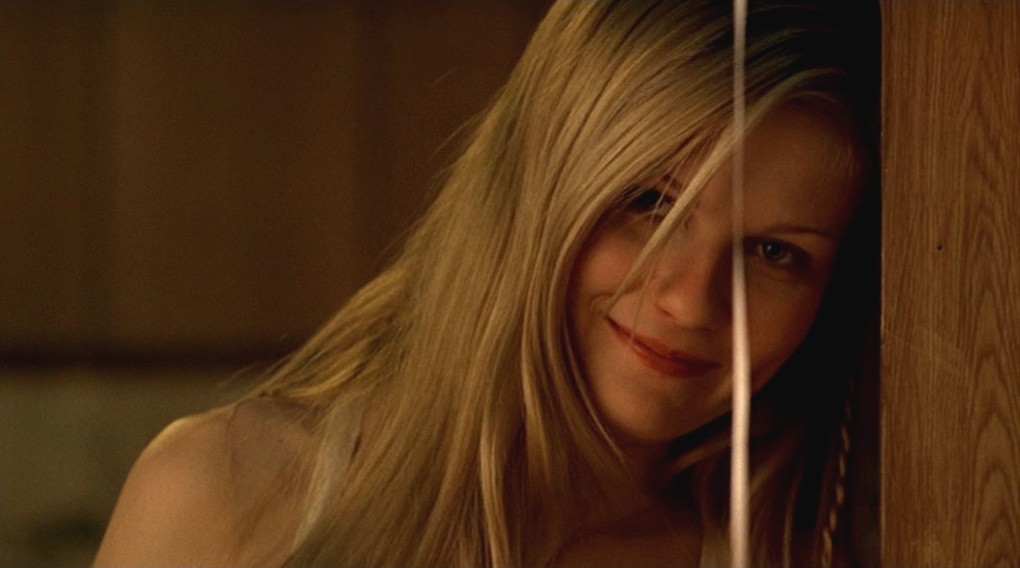 Through The Virgin Suicides, Sofia Coppola and Jeffrey Eugenides made an impressive debut in their respective fields. Although Miss Coppola's screenplay is faithful to Mr. Eugenides' novel, The Virgin Suicides is Coppola's, just as much as Anthony Burgess' A Clockwork Orange is Stanley Kubrick's. Writing a novel and then giving a filmmaker the right to adapt it onscreen is basically like having an artist paint your novel. The words might be yours, but it is up to the artist to visualize the product of his imagination, to interpret your words. And Miss Coppola the artist made it her own, at the same time not swaying away from Eugenides' oeuvre.

Miss Coppola downplayed the boys/narrator's bitterness in the novel, most likely to highlight their tender devotion to the Lisbon girls. She was able to present them as these sweet adolescent stalkers worshipping the girls as though they are quintuplet Virgin Mary, making the girls a shrine inside their mind so as to preserve their memory even after they're gone. That's sweet. Quite creepy, but sweet. An impossible and unspoken love to caged creatures who longed to be free, to be loved and understood. 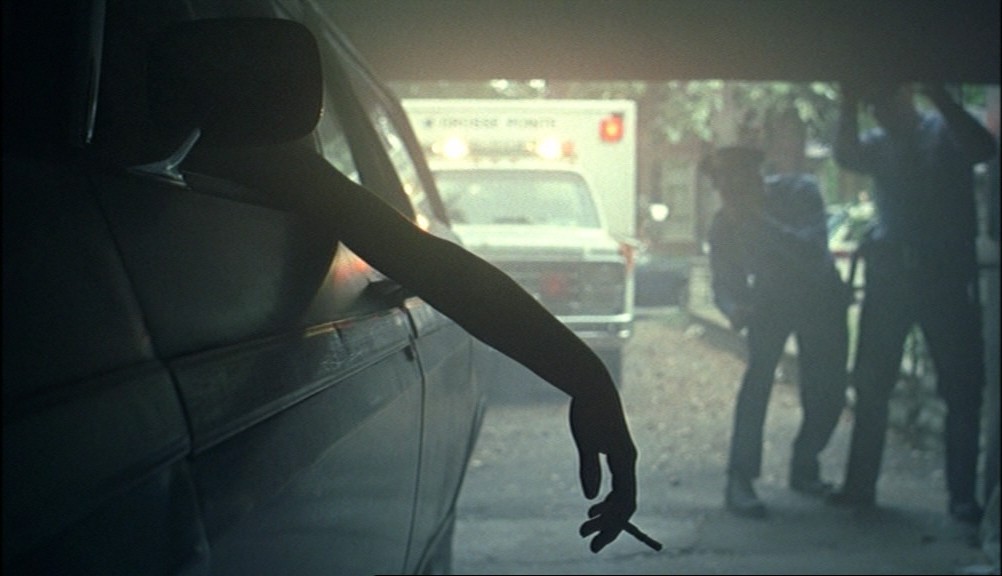 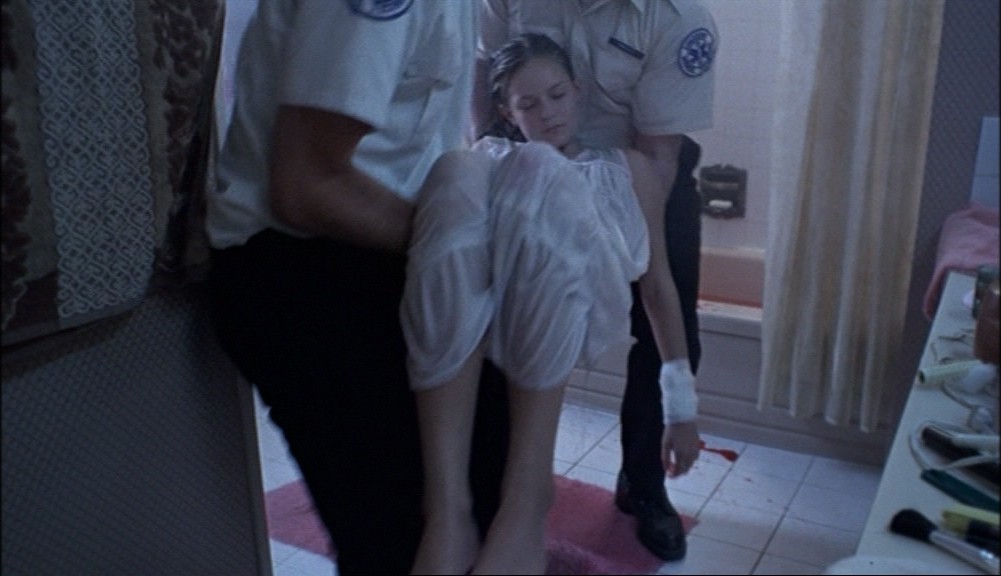 Miss Coppola is not a fan of violence. Although the film has a morbid feel into it, she refuses any sight of gore. The only gory scene is the brief shot of Cecilia in the tub. This nonviolent approach to violence is also present by the end of Marie Antoinette. Dark humor is Coppola's expertise, she has a sense of timing when it comes to playing out the dramedy of a scene — the Palazzolo sequence is a perfect example of Miss Coppola's use of dark humor.

The Virgin Suicides starts out as a melancholic muffled melody gradually amplifying into a deeply despondent ballad. I somehow see the film as a horror movie, with the narrator using the word "evidence" as if there was a crime. Although not the traditional kind of horror movie, The Virgin Suicides successfully created that creepy atmosphere of being incarcerated in your own home, in your own life.

Giovanni Ribisi is the film's narrator. His exhausted-sounding voice — sounding more and more hopeless as the film progresses — adds that somber quality to the film, making it look more gloomy.

Front shots of the Lisbons' house are prominent. It is probably Miss Coppola's way of telling us — her audience — that we are the boys/narrator, we are the Lisbons' neighbors, we are watching them from afar, we are the ones who want to save them.

Autumn orange, moonstone blue (to accentuate despondence), and some rust are the film's dominant colors. An obnoxiously flamboyant green also steals the show during the film's final act. Cinematographer Edward Lachman utilizes autumn orange during "happy" and dreamy scenes (Cecilia's diary montage). As the film descends with the Lisbons, autumn orange starts to fade into blue. 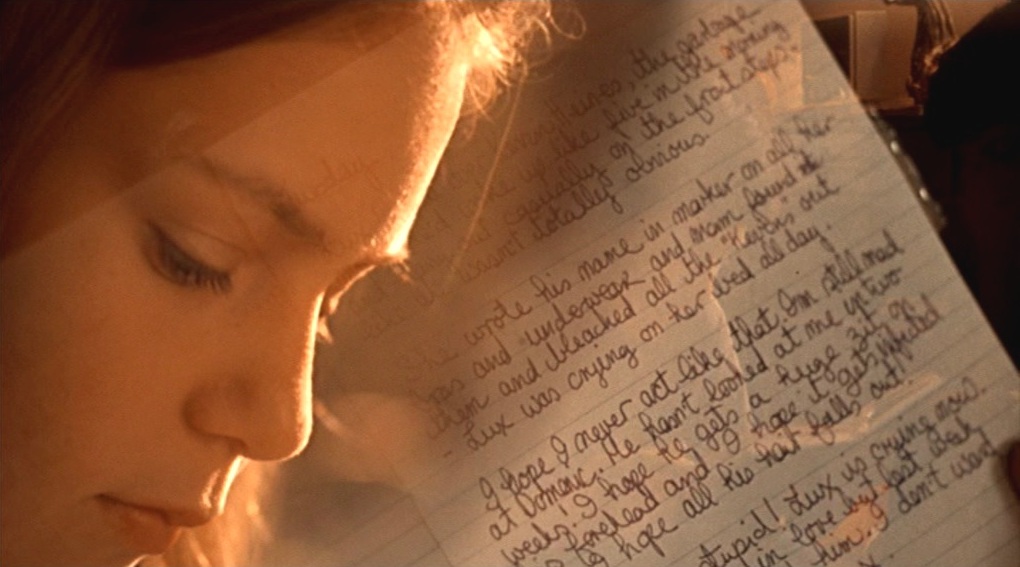 The editing also plays a big part in achieving a certain mood. The film's main transition types are: the abrupt blinking-eye type (straight cut) and the fade in/fade out sh*t, the latter being used only during dream scenes, most likely to induce melodrama. The use of time-lapse photography, in quick succession, is smart and plays well with Miss Coppola's intended tone for the film.

Cecilia and Lux are the only Lisbon sisters that were characterized further in the film. Cecilia a little bit, Lux a lot. They are both played by former child actresses: Hanna Hall and Kirsten Dunst. Miss Hall successfully transitioned from her Forrest Gump days, effectively portraying the stoic and mysterious nature of Cecilia. 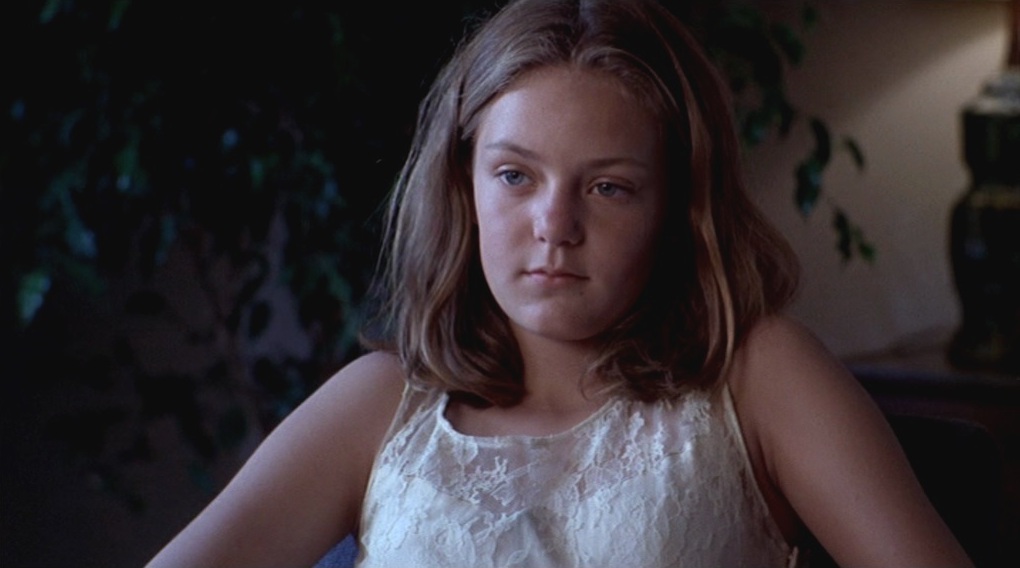 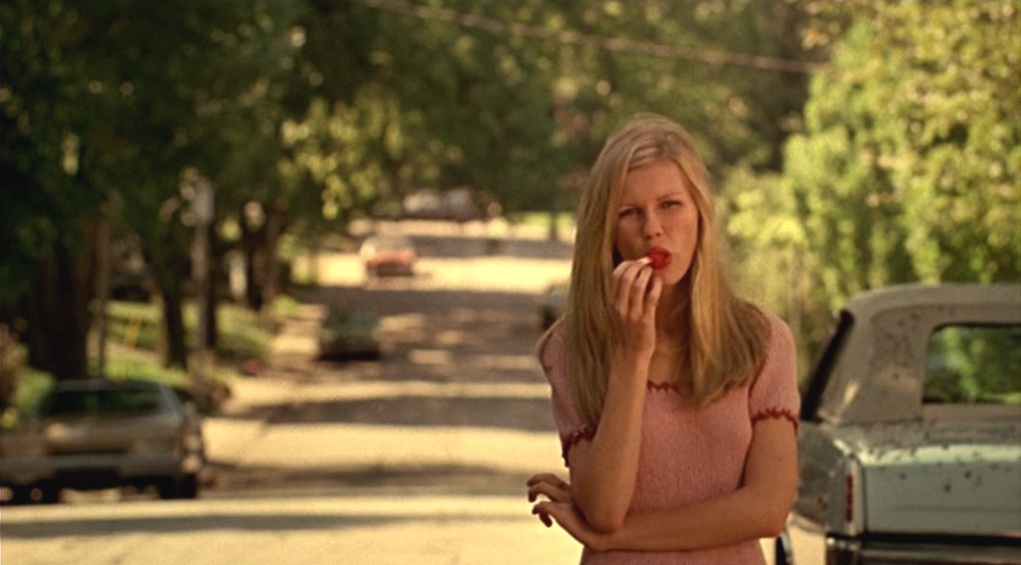 You might think that Miss Coppola has a girl crush on Miss Dunst because Lux dominates the screen; this is because Lux is the epitome of the boys' girl-next-door mindset. Lux is the first and last Lisbon sister the camera captured.

Miss Dunst is remarkable as Lux. She was able to escape the clutches of her child star roles, at the same time deviating from her cardboard cutout characters during that time: Bring It On, Drop Dead Gorgeous, etc. Miss Dunst portrays Lux's promiscuity with playful sensitivity.

The rest of the Lisbon girls are portrayed by Leslie Hayman, Chelse Swain, and Criminal Minds' AJ Cook. And since their characters — Therese, Bonnie, and Mary — weren't emphasized that much, I got them all mixed up and their performances look alike to me: not bad. Same thing with the actors who played the boys: not bad. 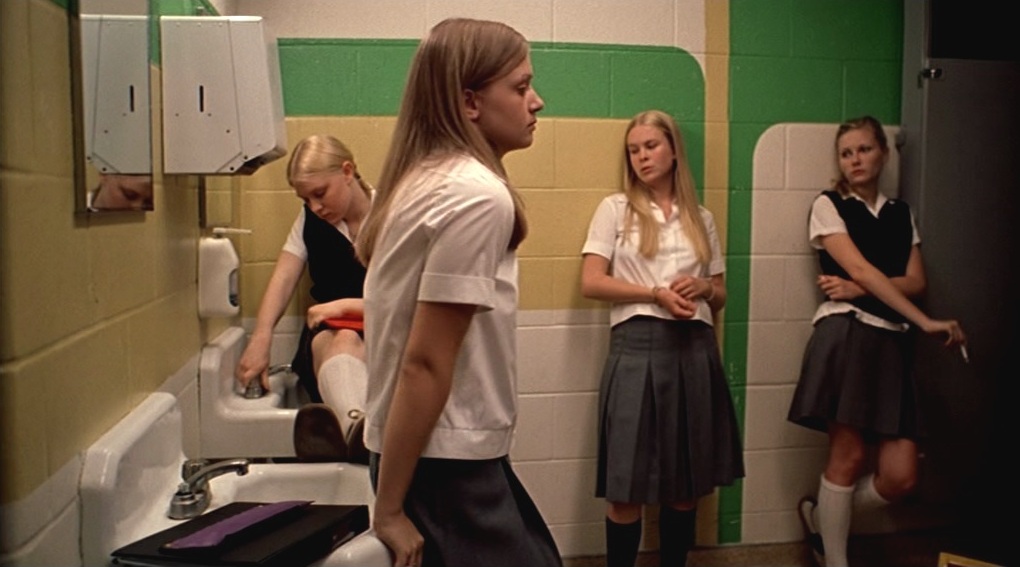 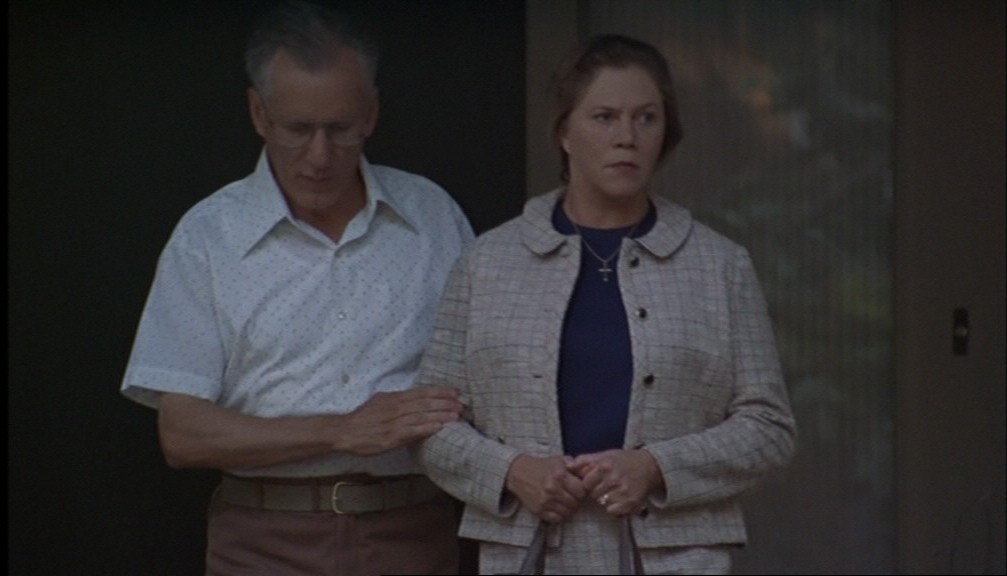 Kathleen Turner sheds her sexy image and succeeds in doing so. Miss Turner is best known for '80s films like Body Heat, Romancing the Stone, and The War of the Roses. She was basically portrayed as a sexy leading lady in those films, that's why it's refreshing to see her as Mrs. Lisbon. The Lisbon dictator matriarch is a religious authoritarian, and Miss Turner became that, at the same time projecting the religiously clouded mentality of a caring mother.

As the henpecked Mr. Lisbon, James Woods drops his villainous onscreen persona. A Math teacher, Mr. Lisbon is lost in his wife's calculated rules of existence. Woods was precise in portraying the powerlessness of a husband and a father, the emasculation of a man amidst the sea of femininity. I got used to seeing Woods as a prick. Most audiences probably remember him as Robert De Niro's frenemy in Once Upon a Time in America, so watching him portray such a defenseless character is truly entertaining. 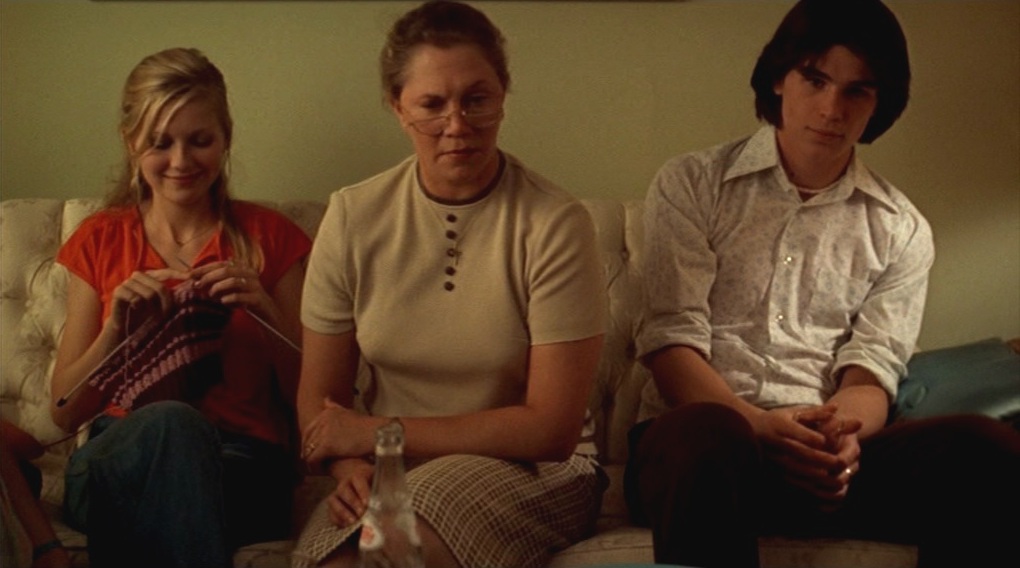 Josh Hartnett is not how I pictured Trip Fontaine while reading the novel. Although handsome, Hartnett just doesn't fit the heartthrob image that was described by Mr. Eugenides. I was picturing someone like Alain Delon in Plein soleil while reading the book. Hartnett just looks like a plain stoner with a bad wig. In fairness to Hartnett, he somehow owned the Trip character, fleshing out Trip's frustration of pursuing a seemingly uninterested girl through weed-induced speech and gestures.

French band Air did a good job with the film's music. Their Playground Love is the film's motif and can be heard frequently. The song was able to underline the desolation and hopelessness of the Lisbon girls, the longing of the boys/narrator, the nothingness of mundane stuff, the emptiness of life. Clouds Up, the music during the film's title sequence, gives us that mood of being way up there... in a celestial place inside our dream.

The film's music selection captures the nostalgia of the '70s. Featuring songs like Heart's Magic Man, Gilbert O'Sullivan's Alone Again (Naturally), and Electric Light Orchestra's Strange Magic, the film's soundtrack is a right-on trip down the memory lane, it really puts you in that bygone era of bell-bottoms.

Contrary to some might say, Miss Coppola's film does not glamorize suicide. Through her stylish approach to a very sensitive subject, Miss Coppola aims to show to her audience that suicide is not glamorous; she shows us what led those girls to the chasm of desperation, as well as the pain suicide passes on to the people left behind.

When I read the book, it was quite difficult to get Miss Coppola's film out of my head. (Maybe because I saw the film first.) They say: "Don't judge a book by its movie." I have to disagree with that. Although short compared to the novel, The Virgin Suicides is an aesthetic glimpse at Mr. Eugenides' novel, at young life's misery, at the pain of longing for the ghosts of yestertears.

"We knew that Cecilia had killed herself because she was a misfit, because the beyond called to her, and we knew that her sisters, once abandoned, felt her calling from that place, too."


Trailer for The Virgin Suicides: