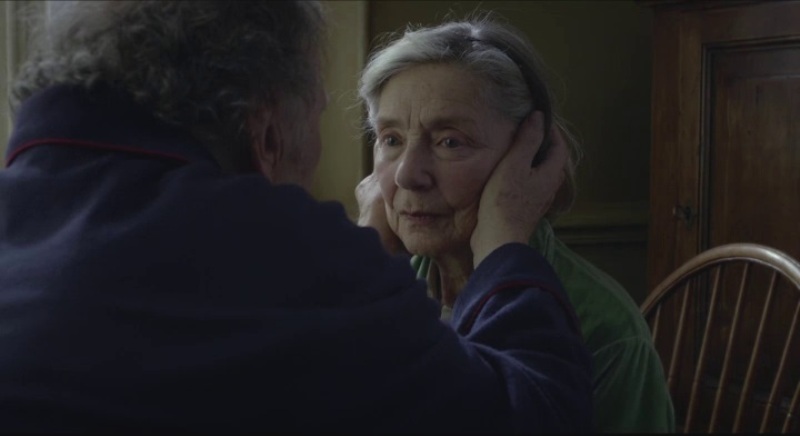 In 2012, Austrian auteur Michael Haneke made one of the most emotionally intimate films of the 21st century: Amour. Remember that Adam Sandler song from The Wedding Singer? That somehow describes Amour.

Anne and Georges (Emmanuelle Riva and Jean-Louis Trintignant) are an octogenarian couple, blissfully married for a long time. Both are retired music teachers. Their forte: the piano. They live by themselves in a Paris apartment. Their only child (Isabelle Huppert) already has a family of her own, and is somewhat emotionally detached from her parents. (She cares more about trivial things like profiting from her parents' house.) One day, the couple suffers a major blow in their relationship when Anne suffers from dementia and then stroke.

The film opens with the police finding Anne's decomposing and decorated corpse inside the apartment. What follows is the film's title: Amour, a French word for love, which is what happens during the rest of the film. The sincerest love that overpowers life and even death itself. Even though Anne cannot play the piano anymore, her music still echoes in Georges' mind, just as their love for each other will reverberate even after death.

Aside from undressing love of its stereotyped notion, Haneke also addresses mortality in a blunt manner. In one scene, Anne says, "It's beautiful. Life. So long." It's probably the film's most memorable line. In a way, the film is a statement that bitterly opposes the "Life is short" saying.

Haneke makes one ask existential questions like: What's the point of living only to die later? Ambition and achievements aside, how far do you want to go through life? Would you still be willing to live if life itself is tediously long and deeply unbearable? What would you do if you see your life gradually fading to black?

Despite those questions, Haneke reassures his audience that love — above all things — is the best cure for life's maladies. 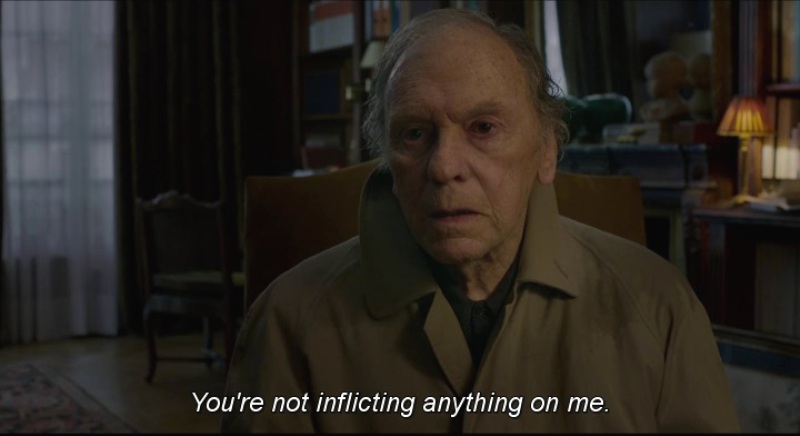 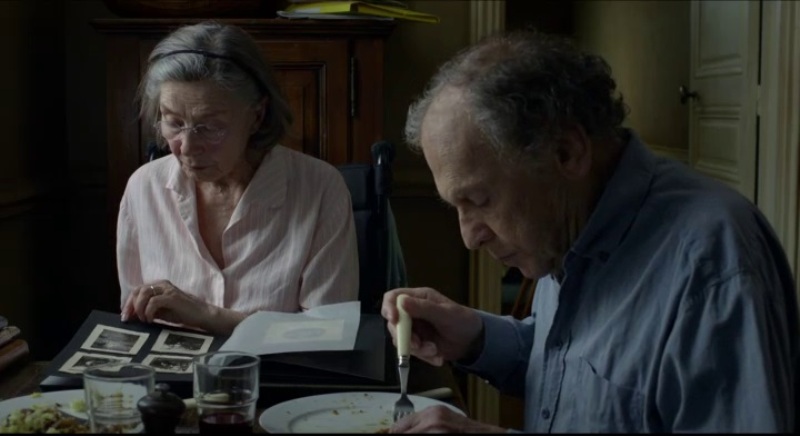 Of course the usual Haneke elements are omnipresent: static shots and sudden transitions. Haneke also utilizes contemplative shots of mundane stuff — my fave is the empty apartment after Anne's first stroke — to create an atmosphere that doesn't demote his audience to a mere passerby, but as someone who stops, looks, looks closer, looks deeper, listens, and feels.

Mr. Trintignant and Miss Riva are simply perfect as Georges and Anne. If you're a fan of French cinema, Mr. Trintignant is a familiar face. He has appeared in a lot of European films, most notably in Bertolucci's The Conformist and Kieślowski's Three Colors: Red. Amour is one of his best performances, something that blends well with Miss Riva's Anne.

Miss Riva is best known as the lead actress in Resnais' Hiroshima mon amour. I don't know how to translate into words what I felt when I saw her performance in Amour. A role of a lifetime. Her performance is an experience that just goes beyond words. In this film, Miss Riva is a quiet force of nature that goes deep inside your heart.

One of the most fascinating things about Haneke's films — most especially this one — is that it doesn't restrict itself to one genre. Amour could be perceived as a horror movie for those who dread grey hair, wrinkles, hearing loss, and fading memory. For some, including yours truly, it is a romantic movie in its brutally honest form. It's a celebration of endearing love, the one that sees beyond the sugarcoated bullsh*t of Hollywood romance. Haneke's film is a love story in its essence, the kind that stands the test of time.

Basically I spent the second half of the film sniffling and reaching for a handkerchief. Anne and Georges. Theirs is one of the simplest yet hauntingly realistic love stories I've seen. Despite the dementia, the mood swings, the fear, the hopelessness, and the guilt, their love never ceases to rise up and reign. Amour is what happens when art finally imitates life.