Beauty and the Boy 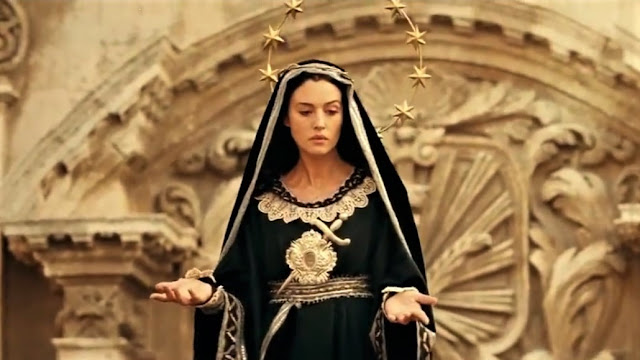 She walks in beauty, like the night
Of cloudless climes and starry skies;
And all that's best of dark and bright
Meet in her aspect and her eyes:
Thus mellow'd to that tender light
Which heaven to gaudy day denies.

- Lord Byron, She Walks in Beauty


Filmmaker Giuseppe Tornatore explores the theme of beauty and heartbreak in Malena. Set in Sicily during World War II, the film is a coming-of-age story about unrequited love and the curse of being beautiful.

Played by Italian goddess Monica Bellucci, Maddalena Scordia a.k.a. Malena is the main attraction of Castelcuto.* She is the wife of a soldier who is presumed dead. Men lust after her. Women envy her. The world becomes a lonely place for Malena. Because of loneliness, Malena's beauty becomes her tragedy. Little does she know she has a stalker/secret admirer, an adolescent boy named Renato Amoroso (Giuseppe Sulfaro). Through the eyes of Renato, we see and experience the tragic world of Malena. With Renato as a careful observer, Tornatore humanizes the objectified Malena.

Malena serves as a catalyst to Renato's transition from puberty to adolescence. He fantasizes about her, imagining movie scenes with him as the main actor, and Malena as his leading lady. Most people confuse strong sexual desires with love. So, was it love? Yes. He loved every inch of her... from a distance.