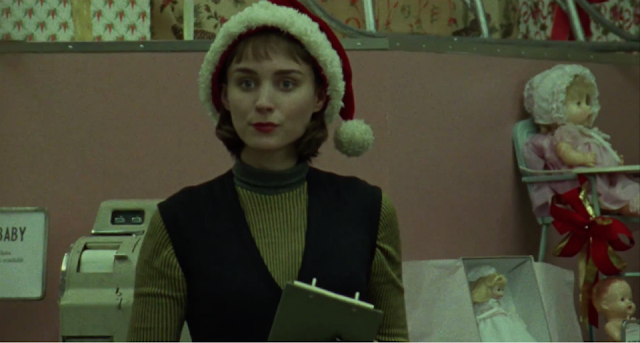 Rare is it in life when we have an instant attraction with a stranger. No such thing as love at first sight, just "like at first sight," which eventually leads to something deeper. That's exactly what happens in Todd Haynes' latest film, Carol.

Haynes' homage to old America (the 1950s in Far from Heaven and the 1930s in HBO's Mildred Pierce) continues in Carol.

Two women at a different point in their lives cross path, become friends, and have an affair in 1950s New York. Carol Aird (Cate Blanchett) is going through a rough patch with her soon-to-be-ex-husband (Kyle Chandler). Meanwhile, Therese Belivet (Patricia Rooney Mara) is a young woman with a brighter future: a marriage proposal from a clingy pseudo-boyfriend and a potential career in photography. Carol is a housewife. Therese is a shopgirl. Two women cloistered by society's sexist box.

We see most of the film from Therese's point of view. She's a young woman who initially evaded taking risks, avoiding taking photos of people because she has some affinity issues. And then she meets Carol. Therese finally opens up her heart for the very first time. And she's now taking photos of people, of Carol to be exact. (So she has Carol to thank for that.)