The Dirty Laundries of the Church 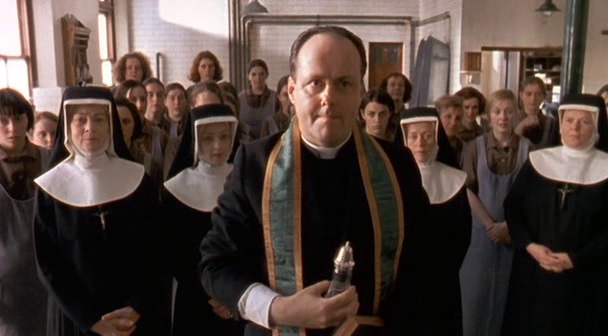 
If The Magdalene Sisters was shown during the Magdalene laundries' "glory years" — no, wait — I don't think it would even be shown at all. The film is a massive punch in the face of those zealots who fantasize that women who don't abide by their religion's "values" are "fallen women," therefore they need to "repent."

Repent so by doing time at the Magdalene laundries, a purgatory where you have to work for hours without pay. It is also where the Catholic Church's dirty laundries are exposed, to the workers at least: a manipulative and corrupt Mother Superior, a perverse priest, basically the Church in their not-so-human form.

Mullan's film chronicles the lives of three women: Margaret (Anne-Marie Duff), Rose (Dorothy Duffy), and Bernadette (Nora-Jane Noone). It shows us how they ended up being in a Magdalene laundry, their time in that hellhole, and how they finally got out of there.

The second heroine, an orphan named Bernadette, is sent to the Magdalene laundry simply because she's a flirt. By Catholic Church's standards, that's already a "sin" regardless of the fact that you're still a virgin, which is what Bernadette is at the time of her incarceration.

Having a child out of wedlock is out of the question for Rose's family, who forced her to give up her newborn baby for adoption. If that isn't enough, she too was sent to the Magdalene laundry to pay for her "sin." 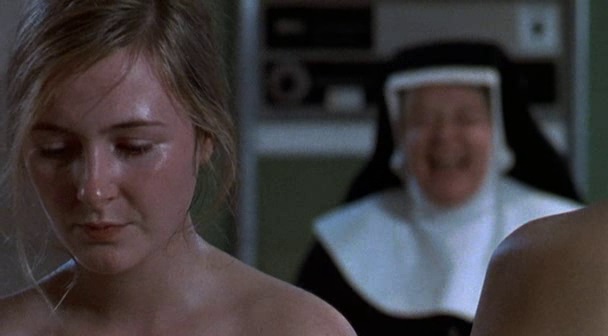 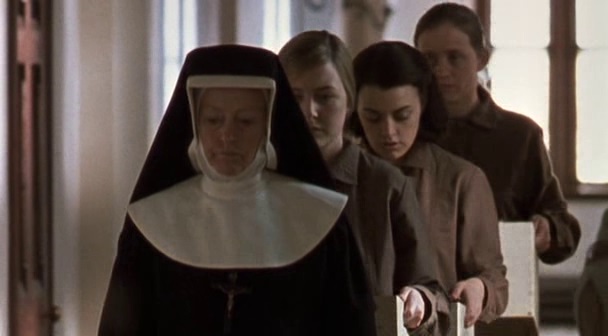 There they meet each other, forming a strong comradery, a bond that stands against the Magdalene laundry's inhumane ways. The three "fallen women" meet Crispina (Eileen Walsh), a tragic woman who is a metaphor of the Church's cruelty.

Like Mullan's other film, Neds, The Magdalene Sisters has outcasts as its main characters; personae non gratae who became heroes in their own right. Mullan presents them as human beings trapped in the harsh and judgmental web of society and religion.

The performances are impressive. Geraldine McEwan's performance as Sister Bridget is on par with Louise Fletcher's Nurse Ratched, only more evil. With that tiny voice and that cold stare, Miss McEwan is excellent as the ruthless Mother Superior, she could easily pass as a villain from a horror movie. Miss Walsh is born to play Crispina, she is simply believable as the naive one. Her "you're not a man of God" scene is one of the film's unforgettable moments.

Miss Duff and her big eyes complement Margaret's resilience very well. Miss Duffy, who looks like Kirsten Dunst's older sister, is perfect as the gentle Rose. Among the three lead actresses, Miss Noone stands out initially because of her strong facial features, and mainly because her character is the so-called black sheep, the one who is always willing to challenge "the rules." The film's poster emphasizes Bernadette as the symbol of quiet but tempestuous uprising, a wicked and vengeful smile at evil's "holy" frontage.

Indeed the film is an unforgiving statement aimed at the atrocities of the Catholic Church. The Magdalene Sisters is an angry cry against the institution who hid the monstrosity beneath the thick walls of the church, the evil underneath the clerical clothing and the wimple.

Unlike what most religious fanatics might say, The Magdalene Sisters is not angry at the Catholic Church itself, but at the Church's hypocrisy. The film is a 119-minute prosecution of criminals who weren't indicted for their crimes against the victims of the Magdalene laundries, women who have to endure the painful and traumatic memory for the rest of their lives.


Trailer for The Magdalene Sisters: