by That Film Enthusiast
Unlike men, women can do a lot of things together without being labeled "gay." We can hold hands, walk arm in arm, dance together, kiss each other on the cheek, sleep on one bed, etc. If I mention all of the things we can do together without society branding us "dykes," you might drown in its bounty. 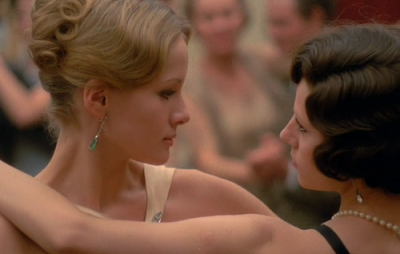 
I find two females dancing together so beautiful to look at. Women are naturally graceful; that's why when they dance, they radiate irresistible rhythm and genuine sexiness.

So why do most people find women dancing together sexy but not necessarily gay? I guess it's because society sees women as vulnerable creatures. And when a woman dances with another woman, it is a dramatic picture of strength in the midst of supposed fragility.

There are so many films that feature two women dancing together. So far, only two have been able to firmly grasp my attention and leave a solid mark in my memory: Indochine and Bernardo Bertolucci's The Conformist.

Bertolucci's 1970 political drama features Dominique Sanda and Stefania Sandrelli dancing together in a scene that would put their characters in the spotlight. Their dance scene stood out for me because it became the film's quasi icebreaker, a tension relieving scene. The film's general tone is dark, gritty, and tragic; and the dance scene served as its incandescent light.

Tall and statuesque Anna (played by Dominique Sanda) assumes the role of a man; her right arm is wrapped around Giulia's (Stefania Sandrelli) hips, while the delicately beautiful and somewhat petite Giulia rests her left hand on Anna's shoulder. Holding hands and eye to eye while their velvety skin and silky dress caress each other, Anna and Giulia dance like a pair of lovers. But they're not. And although the sophisticated Anna is a lesbian and is attracted to the naive Giulia, the dance scene does not scream gay. It is grace at its finest.


The dance scene from The Conformist: