A Dance Into Madness 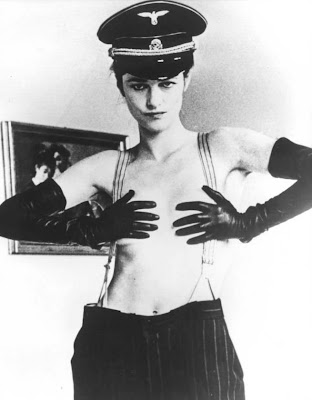 Vienna, 1957 — Max (Dirk Bogarde) is a middle-aged night porter at a fancy hotel. One fateful night, he sees Lucia (Charlotte Rampling). They were lovers during World War II. Max was an SS officer, Lucia was a prisoner. He was the captor, she was the captive.

Lucia, now married, reunites with Max. And they reignite their sadomasochistic love affair. Soon, Max will have a trial for his war crimes. Max and his former associates wash their hands by "filing away" the witnesses and destroying the documents. Max hides his "little girl" from his ex-comrades. What will Max do if they find out about Lucia?

Cavani portrays Max and Lucia as victims of fate. They share an odd romance at the wrong place, at the wrong time. What I found intriguing about the film is Max and Lucia's willingness to succumb into pure madness. Cavani shows us how far these characters would go to preserve their physically and mentally tormenting relationship.

Charlotte Rampling is stunning as Lucia. Compared to Dirk Bogarde, Rampling hardly has any dialogue in The Night Porter, but she managed to give a remarkable performance through mere facial expressions and body language. (Rampling is very good with facial expressions. Remember that "staring scene" in Stardust Memories?) In this film, Rampling looks like a cross between Julia Roberts and Kate Moss. It is kinda distressing to watch Lucia, a supermodel-looking woman who goes back to her traumatic past.

A rather effeminate and charming Bogarde is a revelation in this film. Bogarde makes Max look like two different characters. Rampling and Bogarde have an incredible chemistry, which is one of the film's strong points.

Just like Andrzej Żuławski's Possession, The Night Porter is still a perplexing film for me, even after numerous viewings. Cavani was very effective in making a visually and psychologically perturbing film. With The Night Porter, Cavani made an ambitious film.

FYI: Cavani reportedly paired Rampling and Bogarde after seeing them in Luchino Visconti's The Damned.


Fan-made trailer for The Night Porter: