by That Film Enthusiast
One of the most hyped movies in the history of Philippine cinema, indie film Heneral Luna tells the story of General Antonio Luna, aka Juan Luna's younger brother, aka the man who led the Philippine Revolution Army during the Philippine-American War.

Despite the film's popularity, I've yet to see the film. (I know, right?) Will definitely do so.

Without further blah blah blah, the other thing that piqued my interest for Heneral Luna, aside from the positive reviews, is this poster: 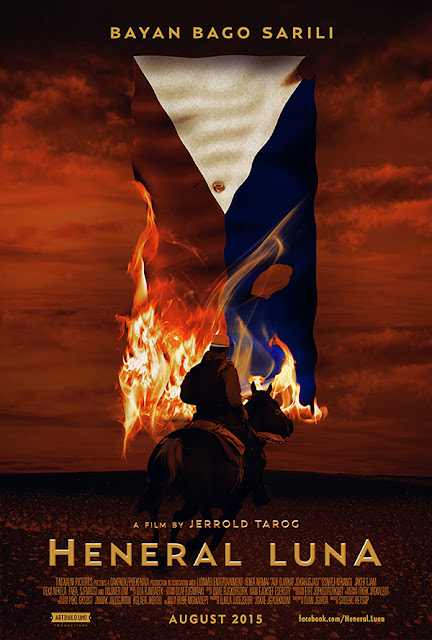 The film's unapologetic tagline, "Bayan Bago Sarili" ("Nation Before Self"), is a blatant attack on most Filipino politicians. Philippines is a country that is everlastingly plagued with corruption. Therefore, Heneral Luna seems to be the outlet of Filipinos' frustration.

So the poster with the burning Philippine flag is a literal and figurative symbol of Filipino's burning desire for revolution, their anger and frustration is consuming the nation. Oh, yes. The Philippines is on fire.

As I've mentioned before, I am mostly disappointed at the current state of Philippine cinema. That's why films like Heneral Luna — you know, movies that are about actual Pinoys — somehow restored my faith in Filipino filmmaking.