The Dilemma That is Philippine Cinema

by That Film Enthusiast
Gone are the days when Brocka et al. reigned Philippine cinema. It would probably take another master filmmaker for our nation's cinema to recover and be given the kind of international recognition it once had. 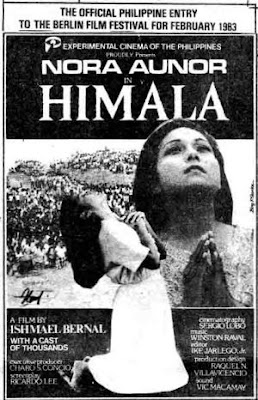 Himala (Miracle).
That's probably what our cinema needs. A miracle.

Although we often have entries to international film fests like the recently-concluded Cannes Film Festival, Philippine cinema still has a long way to go in terms of identity and originality.

Once our cinema has established a particular trademark, Filipino films will finally be put back on the map of international cinema — alongside cinematic benchmarks like the German cinema, Italian cinema, Japanese cinema, and French cinema.

Cinema should not be a piggy bank

In order to be given due recognition, one has to be taken seriously. And one of the obstacles that hinder Philippine cinema to be taken seriously is capitalism. Most Filipino "filmmakers" look at cinema as a piggy bank, not as an art medium. They invest in unbelievably good-looking but run-of-the-mill "thespians," turn them into profitable love teams, and then put them in movies with recycled storylines — 'yung tipong nagawa na before, pero iba lang 'yung mga artista (the kind that's already been done before, only with different actors). 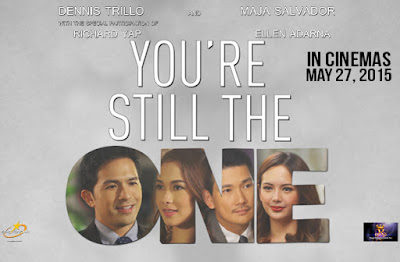 For many years now, our mainstream cinema has been dominated by capitalist movies with senseless storylines. Blockbusters often have the same formula: pretty girl falls for pretty boy, some bumpy roads along the way, but no worries because they'll eventually live happily ever after. Or some comedian du jour makes a movie in which the punchlines rely on humiliating other people's physical appearance. Or some fantasy-comedy that is already on its fifth or so installment. And finally there's the neverending horror movie franchise, which I think is now on its 15th installment.

Such are the kinds of films that insult every Filipino's intelligence. Pinoys aren't stupid. Therefore they don't deserve to be treated as such. Come on, filmmakers, Filipinos deserve better.

Cinema should never be reduced into a mere avenue of profit-making. Cinema should be exalted as a sacred form of art. It must be treated with utter respect, and must be done with the primary purpose of expressing, not impressing.

I can't help but cringe every time I type "Philippine cinema" on Google. There's this sense of embarrassment when I see the lineup of films that represent Philippine cinema. I mean, are these films truly representative of every Juan? Do Juans and Juanas always meet an artistahin (movie star-looking) other half? Hanggang dito na lang ba ang kaya nating ipakita sa buong mundo? Hindi naman, 'di ba? (Is this all that we can show to the world? Not really, right?)

I perfectly understand that those films have a target audience. Romantic comedies often aim to impress female teenagers and young adults. On the other hand, horror movies and comedies often target the masa (common people). However, such demographics deserve better than recycled storylines that degrade people's knack for quality. The moment the audiences get used to films of "pwede-na-'yan (mediocre) quality," that's the time excellence and sincerity take the back seat.


In our country, life imitates art, when it should be the other way around. Given the power that they have, our filmmakers should translate every Filipino human condition more often, instead of producing and/or directing movies with silly and predictable plotlines for the sake of commercial success.

Philippine cinema needs to produce more films that encourage a sense of heritage in every Filipino, the kind of films that enhance their appreciation of their country's culture. 'Yung tipo ng pelikula na kaya nating ipagmalaki sa buong mundo. (The kind of film that we can proclaim to the world.) 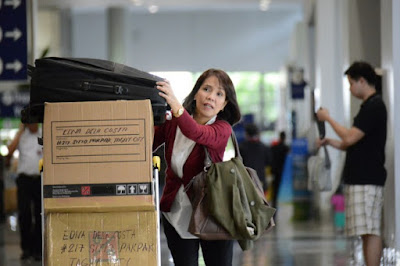 
Filmmakers also need to create films that perfectly capture the complexity of everyday Filipinos' lives. Cases in point: Anak and Edna. Both films portray the struggles of OFWs (Overseas Filipino Workers). Both films were also praised by both critics and audiences, mainly because the films' characters are the kind of people they can actually relate to, not the kind that they can only see onscreen — you know, pretty and handsome characters thrown in far-fetched situations.


If a filmmaker is going to make a romantic comedy, he/she should at least aim for originality and quality; hindi 'yung Pinoy version lang ng kung anong Hollywood or Korean movie dyan (not just a mere Pinoy version of some Hollywood or Korean movie out there). Huwag naman ganun. (Don't be like that.) The same thing goes for horror and fantasy movies.

Like Lourd de Veyra, I'm not a high-brow snob. I enjoy sweet romantic comedies as much as I enjoy serious art films. I appreciate all kinds of films, as long as they are original and of good quality — the quality that can compete with French movies or the like. I'm simply a Filipino audience who is hungry for a better Philippine cinema, simply because I believe that Filipino filmmakers have the power to be better.

A movie doesn't have to be an existential depress-fest to be taken seriously. It doesn't have to be included in The Criterion Collection either. I'm not saying that you need to be a perfectionist like Stanley Kubrick or Charlie Chaplin. One only has to have the effort and sincerity that could very much dictate the film's quality. Hindi pwede ang pwede na (Mediocrity is unacceptable), because "good" is not good enough. In the quest for excellence, one has to strive for greatness.

And then came the 2000s, Philippine cinema went back to its "puppy love era." Some sweet pretty girl longs for her sweet pretty boy (a.k.a. Prince Charming). I mean, how superficial can that be? Not all girls dream about Prince Charming. As the saying goes, "you don't need a boy to live the dream." Stop marginalizing our young Filipinas. Cinema should stop telling them that all they can do is wait for "the right boy." Young Filipinas are not damsels in distress.

We need to get rid of such stereotypes and be true to ourselves. Filmmakers should make more movies that echo each and every Juan. Say, make a movie about the daily struggles of MRT passengers. Or make more movies about call center agents, PUV drivers, people who live hand to mouth, etc. — you know, everyday Filipinos. Or, why not make a movie about our "honest" politicians? Tutal malapit na naman ang lokohan, este, botohan. (Anyway, deception, I mean, election is near.)

Cinema can be an effective instrument of change. It is an influential medium that can either make or break a system. Cinema should mirror what's actually happening in our country. Who knows? This particular medium might urge our nation to become a first-world country.


The lack of local support

How many Pinoy movies are shown each month? Not as many as foreign movies. Most Pinoy producers only finance a movie when it's already the MMFF season. Let us support each other in creating more quality homemade movies, so Pinoy films can finally dominate the movie theaters 12 months a year.

The government also plays a part in Philippine cinema's development. Why not allot a budget that can help indie filmmakers finance their movies? If not possible, why not promote quality Pinoy movies by encouraging foreign distributors to screen it in their country?

Our filmmakers need a lot of help and support from us, their fellow countrymen. 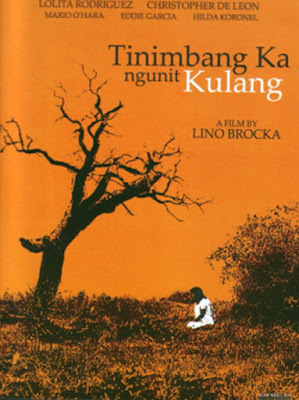 Tinimbang Ka Ngunit Kulang (You Were Weighed But Found Wanting)
is considered as one of the greatest Filipino movies ever made.


Our cinema may never go back to the triumph of its second golden age ('70s-'80s). But who knows? A third golden age for our cinema is still possible. With the continuously growing number of Filipino talents gaining international recognition, it is possible that our cinema can also have the worldwide recognition it longs to have. It might seem difficult, but it's not impossible. Effort pa more! (Put more effort!)

thank you for introducing us to good Philippine cinema.