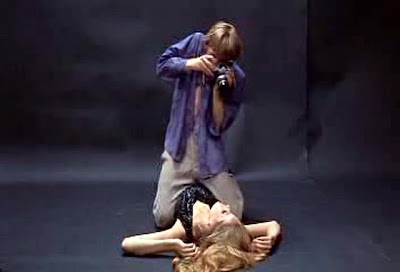 Lots of significant events took place during the swinging '60s. The rise of the hippie culture. The names Che and Fidel became synonymous with the word "revolution." The Beatles conquered the music scene. And Neil Armstrong became the first person to land on the moon.

The '60s is also a fundamental year for cinema. For the first time, audiences saw James Bond on the big screen. The French New Wave emerged. Hitchcock made Psycho. Fellini made La dolce vita. It is also during this decade when dreamy filmmaker Michelangelo Antonioni made Blowup.

Antonioni's film stars David Hemmings as Thomas, a big-time fashion photographer. Thomas lives a hedonistic lifestyle. Marijuana here, sex there. But he is bored. After blowing up his pictures, Thomas discovers that he accidentally photographed a murder. He does everything to get the clear picture of the incident.

The film echoes the voice of Swinging London: the fashion, the music, and the lifestyle. All are captured in this melancholic film. In a way, Antonioni's British film is like a colored and more modern version of La dolce vita. The main characters from the two respective films are so fed up with their lives, until one event made them examine their existence.

Blowup also features a young Vanessa Redgrave as the woman who captivated Thomas' lens, I mean, heart. Carlo di Palma's cinematography is sweet as candy. (Kinda ironic because the film has a bitter ambiance in it.)

Blowup is one of Antonioni's best works as a director. It's (probably) his most disturbing film.

I love, love, love Blowup! It's endlessly fascinating and brilliantly put together. Antonioni isn't always to my taste, but here he really crafted a masterpiece.

This was my write up on it, if you ever wanted to check it out: http://enterthemovies.blogspot.com/2009/03/blowup.html

I've read somewhere that this film is Bergman's ONLY favorite film by Antonioni.