"Gone with the Wind" of music videos 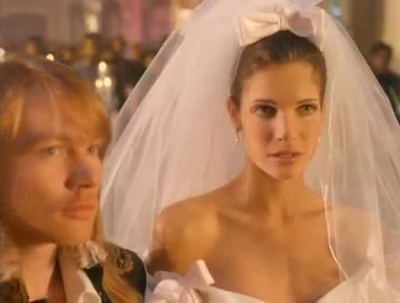 I'm not really a big fan of Guns N' Roses. (I don't really dig guns or roses, I'm more into Nirvana.) But I find their music video for November Rain truly remarkable.

November Rain also features Seymour in a sexy wedding dress designed by Carmela Sutera. There's also the festive wedding reception, which was sabotaged by a freakin' rain (a November rain, I suppose). Then there's the scene that broke my heart: the tragic dénouement. It illustrates the "'til death do us part" saying in such a piercing manner.

To get a bigger picture of what's up with Axl and Seymour's characters, check out the band's music video for Don't Cry and Estranged.

The cinematography is one of the best things in November Rain. I love the helicopter shot. It gave justice to Slash's amazing guitar solo.

The editing is awesome, especially during the flower throwing scene.

And yes, I didn't know Axl and Seymour can be good actors too. They gave very good performances.

What I really loved about this music video is its cinematic impact. It's not just another music video. It's like the Gone with the Wind of music videos. Morahan's work for November Rain is something that inspired and will inspire other music videos. It has the power to haunt the viewer. Unforgettable.