by That Film Enthusiast
Sofia Coppola's feature film debut is a spellbinding adaptation of Jeffrey Eugenides' most famous novel, The Virgin Suicides. Set during the '70s, The Virgin Suicides is about the life and death of the Lisbon sisters, the overprotected daughters of a devout Catholic couple in a middle-class Michigan suburb. 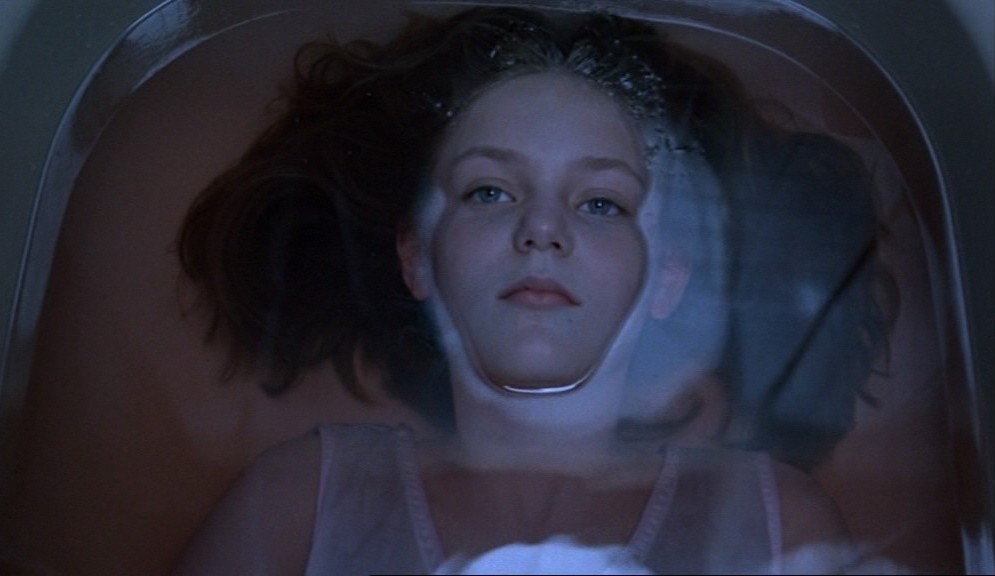 "Cecilia was the first to go," says the narrator as we stare at Cecilia's serene face, her daydreaming blue eyes staring at a place way beyond other people's reach.

Cecilia — played by Hanna Hall, a.k.a. young Jenny in Forrest Gump — just attempted suicide by slashing her wrists. But we don't realize that until we notice the bloody tub she is submerged in.

This is one of my most fave shots in the film. It is so haunting it's beautiful.† Cecilia's face is the only thing that is not fully submerged in the tub. It's as though she is being baptized, or she's just floating on her back in a swimming pool.

In a way this shot reminds me of Robert C. Wiles' photo of Evelyn McHale's demise, which is dubbed by the media as "The Most Beautiful Suicide." Cecilia and Evelyn's calmness amidst a violent situation is fascinating and harrowing at the same time.

The name "Cecilia" means "blind," which is kinda ironic since Cecilia the character sees beyond the ordinary. She was able to see things her sisters or other people don't see. "The trees like lungs filling with air."

An introvert whose only confidant is her beloved diary, Cecilia is dreamy, precocious, shy, and mysterious. She's a 13 year-old girl with the heart and mind of a 23 year-old woman.

Cecilia is my favorite Lisbon sister. I feel like I could hang out with her and share some comfortable silence, you know, that moment when you don't feel awkward thinking of what to say to each other.


†I am merely reacting to the scene's aesthetic aspect, not suicide. Suicide is never beautiful. It is often a product of depression, which is not a beautiful feeling.