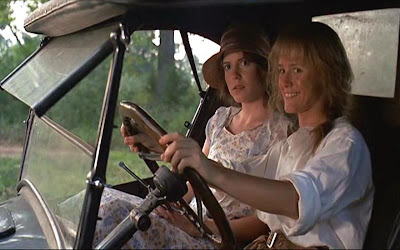 The film starts with forty-something Evelyn Couch (played by Kathy Bates), a bored housewife whose marriage to an inattentive husband (Gailard Sartain) is as bland as a tasteless salad. Evelyn is a polite, loving woman; but most people — including her husband, Ed — do not appreciate her worth. This predicament of hers has brought her nothing but low self-esteem.

Idgie is Ninny's sister-in-law. She is the youngest of the Threadgoode family. Idgie is a free-spirited tomboy whose only best friend is her brother, Buddy (Chris O'Donnell). After Buddy's tragic death, Idgie practically left her family and withdrew from civilization. At the behest of Mama Threadgoode (Lois Smith), Ruth comes to Whistle Stop and convinces Idgie to return to her family.

Ruth was Buddy's girl. A daughter of a preacher man, Ruth is the exact opposite of Idgie: Ruth is prim and proper, doesn't drink or smoke, and regularly goes to church. But differences aside, Idgie and Ruth became emotionally connected with each other. And they eventually became dear friends. But their blooming friendship is suddenly cut short when Ruth moves to Valdosta, Georgia and marries Frank Bennett (Nick Searcy), a seemingly genial man who is actually a wife beater and a racist. Idgie goes to Valdosta and rescues her pregnant best friend from the abusive Frank.

As the film moves on, Evelyn becomes best friends with Ninny. Inspired by Idgie's spunk, Evelyn transforms into a self-asserting woman who finally found the nerve to stand up to Ed.

A number of times, the film's narrative shifts between Evelyn's story (set during the 1980s) and Idgie and Ruth's story (set between World War I and World War II). Fried Green Tomatoes is a multilayered film with themes including female friendship, feminism, race, and religion. Although usually categorized under drama and comedy, the film also has a tinge of suspense, thriller, mystery, and romance in it. 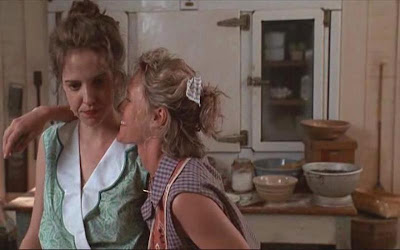 Idgie and Ruth shared a friendship so deep that they are the only ones who could understand it. They were best friends, business partners, sisters, soul mates, and — believe it or not — lovers. Theirs was a long-lasting friendship and an unrecognized romantic relationship.

Fried Green Tomatoes is actually a lesbian love story marketed as a chick flick. Written by Fannie Flagg and Carol Sobieski, the screenplay was based on Flagg's novel: Fried Green Tomatoes at the Whistle Stop Café. In the book, Idgie and Ruth are a couple. But the producers wanted the film to appeal to heterosexual audiences, that's why they decided to portray Idgie and Ruth as best friends. Although Idgie and Ruth were heterosexualized in the film, an open heart and mind can sense an apparent romance between the two. Director Jon Avnet has said that the food fight scene is an analogy for a love scene, but I found the bee charming and honey dipping scene more erotic — mainly because it's rich in sly sensuality, possessing a subtle implication of romantic love.

Geoffrey Simpson's cinematography is as lovely as the film, it really captures the nostalgic aura of the South. The music, just like the film itself, has the power to resonate in your mind. Thomas Newman's score is wonderful. Big George, which features Marion Williams' astounding vocals, is by far one of the beautifully haunting pieces of music I've ever heard.

Kathy Bates is charming as Evelyn. The film features one of Miss Bates' versatile performances; she was very convincing as a timid and frustrated Evelyn and a confident and nobody-messes-with-me Evelyn. Miss Bates is definitely one of the best character actresses around.

Jessica Tandy is delightful as Ninny. Although I'm not familiar with most of Miss Tandy's works, I found her performance very infectious and simply delightful. She seems very natural as Ninny. 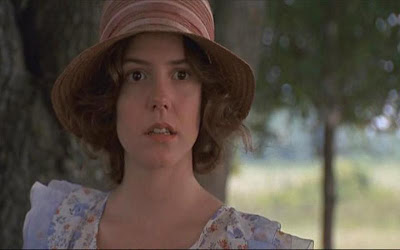 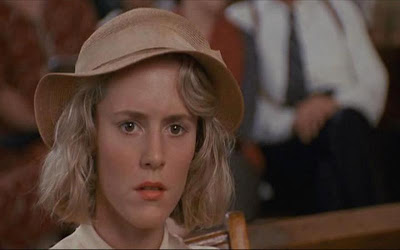 My most favorite performance is that of Mary Stuart Masterson. She is excellent as Idgie. Miss Masterson was very precise in portraying the essence of Idgie's character. While watching the film, I didn't notice Mary Stuart Masterson because I was so enchanted by her performance as Idgie. Masterson became Idgie, I don't know how she did it. After watching Fried Green Tomatoes and Benny & Joon, I am now convinced that Miss Masterson is one of the most underappreciated actresses of all time. 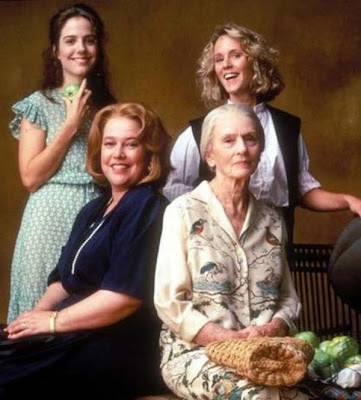 Seated (L-R): Kathy Bates and Jessica Tandy as Evelyn and Ninny.
Standing (L-R): MLP and MSM as Ruth and Idgie.

Honestly, I loved Fried Green Tomatoes. It is one of the few films that *really* got me upon initial viewing. I came about this film with a fresh, unknowing mind. Having a childhood crush on Chris O'Donnell, I've heard of the title before but never really bothered to check it out. Now that I've seen Fried Green Tomatoes, I can't get enough of its unique flavor. It's like a delicious and sumptuous food that I always crave for.

A film with a heart, mind, and soul, Fried Green Tomatoes truly satisfied my taste buds.

One of our favorite movies...watch it over and over again.
I’ve been following and enjoying your blog for a while now and would like to invite you to visit and perhaps follow me back. Sorry I took so long for the invitation