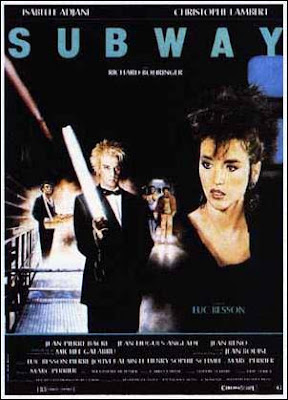 Billed in the film as "Christophe Lambert," Lambert is Fred, a spiked-blond-haired guy on the run from a group of henchmen after stealing some important documents from Héléna's husband. He finds refuge in Paris' subway. Fred blackmails Héléna (Isabelle Adjani)  and tells her that he loves her. Héléna doesn't seem to return Fred's affection. Meanwhile, lots of different characters who live in the Paris metro would become Fred's friends.

The action sequences make you feel like you're part of it. I think the remarkable car chase scene in 1968's Bullitt somehow inspired Subway's adrenaline-pumping opening scene. There are also some scenes that I find comedic. Subway also has a fair share of romance.

The characters are quite interesting, a bit funny at times (especially the character of Batman, played by Jean-Pierre Bacri). Fred is a character who makes me ask quite a lot of questions. Héléna is a type of character I would dig deep without asking questions. She might be this bored bourgeoisie at first, but there's more to her than that. Héléna also does her comedic part during the dinner scene.


Christopher Lambert is quite excellent as the (somewhat) tawdry Fred. Beautiful Isabelle Adjani is enchanting as Héléna. Richard Bohringer as the florist is amusing (with that husky voice and all). A young and gorgeous Jean-Hugues Anglade might be the most charming roller skater I've seen so far (^_^). Michel Galabru as the sarcastic inspector is entertaining. A pre-Leon Jean Reno also has a supporting role in the film.

The music is excellent. It's one of the reasons why I liked this film. Eric Serra (who also appears in the film) is our generation's Mozart. What a musical genius. I liked his work in most of Besson's films, but I especially liked what he did for Subway. The song during the concert scene (Guns and People) is unforgettable. Guns and People is basically a love song. It parallels Fred and Héléna's love story, how Héléna got Fred to fall in love with her. The conversation between The Drummer (Reno) and Fred reminds me of a line from Guns and People ("Just one glance and love, it hit me..."):

It's cheesy but not that cheesy. It's romantic. Some critics found the film's plot to be mediocre (which is kinda true). But Subway still managed to be out of the box by offering its audiences some stylish shots (which would become Besson's trademark) and sequences.

An excerpt from Subway:

I ADORE this film! I am a huge Lambert fan so to me this is one of my personal fav. of his!

I love Lambert in this...and that hairdo ;)