The Outcome of Original Sin 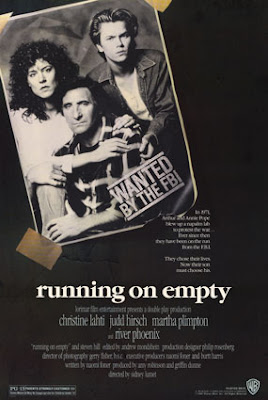 Tagline: In 1971, Arthur and Annie Pope blew up a napalm lab to protest the war...Ever since then they have been on the run from the FBI. They chose their lives. Now their son must choose his.

"Why do you have to carry the burden of someone else's life?" Lorna asks Danny.

Danny Pope (River Phoenix) and his brother are just like us, human beings, suffering the consequences of Adam and Eve's original sin. Changing your name every six months is definitely not a normal way to live. The parents seemed to have forgotten that their children are bound to have a life of their own.

Running on Empty is a film that prefers to be simple in showing the characters' emotions and the plot, it does not rely on too much theatrics.

The performances are powerful and (perhaps) underrated. There are lots of very good actors in this film. River Phoenix is compelling as Danny. In this film, Phoenix exudes a childlike innocence. He may have quite a deep voice and a "grown man" image for a 17 year-old but you can still sense the naïveté in him. I can't imagine other actors playing the part of Danny.

The scene with Annie and her father had me wiping tears off my face. Christine Lahti and Steven Hill nailed that scene. Very touching. Lahti's performance as Annie is engaging. Judd Hirsch's rendition of the control freak Arthur made me want to ask: "Why is the father so selfish?!?" For a while, I even said that Arthur was such an a**hole for "suffocating" their children.

I'm surprised that Martha Plimpton is not a big actress. She was remarkable as Lorna, Danny's girlfriend. Her line deliveries are very good. The actors didn't commit the crime of overacting and being so subtle. 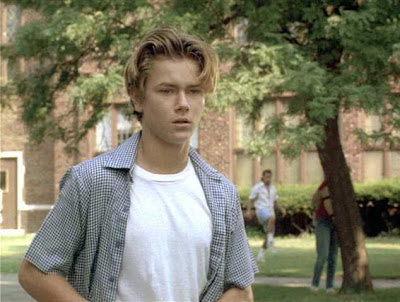 I've only seen three of Sidney Lumet's works, those being Network, Murder on the Orient Express, and this film. The thing that I noticed in his films, most especially in Network and Running on Empty, is that most of his characters are not hard to know because you can find some of yourself in them. I can somehow relate to Danny. He is a shy and soft-spoken person, but he is driven to pursue his dreams. He also tends to hold back his true feelings to the point of being misunderstood by some people. Danny can also be unpredictable at times. "You're very confusing, you know... sometimes you can be so straight, and other times you turn around and be like that," Lorna says to Danny.

The script, written by Naomi Foner (Jake and Maggie Gyllenhaal's mom), is almost excellent. There are no unnecessary scenes, each of them are like the veins in our heart, one can't pump without the other. The cinematography could've been better, but it's not that bad. The music fits the film right. It was able to represent the film's melancholic tone.

My rating: 8/10 - even though the plot is not that new, the film deserves more recognition because you can find depth in its characters and the performances are as touching as the film itself.


Trailer for Running on Empty: