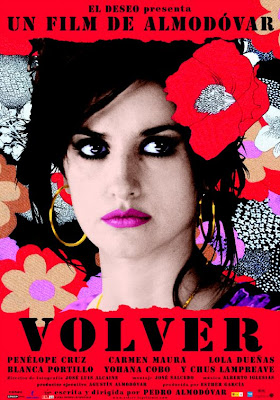 Volver - Spanish word for "to return."

Plot: After her death, Irene (Carmen Maura) returns to her home town in order to fix the situations she couldn't resolve during her life.

Pedro Almodovar has a heart of a woman, he knows what's going on in their mind and how to convey their thoughts. No wonder the heroes in most of his films are women. In Volver, Almodovar was able to balance drama, comedy, thriller, and mystery with finesse. Almodovar is the best Spanish director since the legendary Luis Buñuel.

The film's windy opening scene very much summarizes the characters' problems — it's a force of nature that one has to deal with. The cinematography looks delicious, just like the vegetables Raimunda buys at the market. The music is well placed, it fits the mood of each scenes very well. The plot moves with ease and the screenplay doesn't dwell much on unnecessary scenes. Almodovar amuses the audience with some clever camera shots. 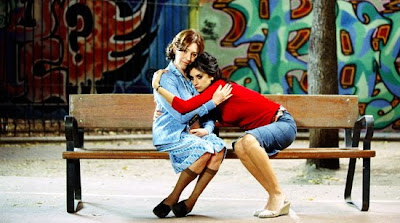 The characters in this film are like the people I meet everyday. There's the friendly and tough Raimunda (Penelope Cruz), and there's Raimunda's superstitious and a bit reserved sister Sole (Lola Dueñas) who I think represents the people at the village. They're just ordinary people yet Almodovar was able to give them depth. The characters' exchange of witty dialogues is entertaining.

The acting is simple, but not dull. Cruz was quite a surprise in this film, much different from her Hollywood films. Cruz was able to portray a hardworking woman, a protective mother, and an aloof daughter very well.

My rating: 8/10 - Volver is one of those films that I can watch over and over again, it's a warm delight.