A Trio, Not a Quartet 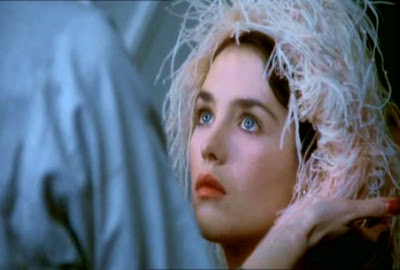 Merchant Ivory's Quartet is set in 1920s Paris. The film stars Isabelle Adjani as Marya, a hapless young woman adrift with her husband, Stephan (played by Anthony Higgins). She finds herself financially dry after Stephan is sent to jail for theft. Alan Bates and Maggie Smith are H.J. and Lois Heidler, an unorthodox British couple who helps Marya by letting her live in their humble abode. Of course their help is not unconditional.

Marya is a naïve, sad character. Oh, did I mention she's beautiful? (Well of course she's played by Isabelle Adjani!) According to Lois, "people say she's from Martinique or some place." As a down-and-out foreigner in Paris, Marya is having a hard time looking for a decent job. That's why Marya wastes her time thinking how unhappy she is. So unhappy that she becomes H.J.'s mistress. Lois, being a martyr that she is, tolerates her husband's infidelity. I expected a lot more from Isabelle Adjani's character. But Marya is just desolate, that's all. There's nothing more to expect from her.

According to Marya's friend, H.J. is "a very important man. He makes discoveries. He helps young people. He has flair."

Lois is a painter, but we can see her painting in only one scene. H.J. and Lois, just like their friends, enjoy partying, eating, and talking about other people. They are utterly concerned about their reputation. In other words, they're boring.

Stephan is a not-so-legal art dealer. (You can't be legal when you steal one of Napoleon Bonaparte's swords.) He is quite unusual because he is a born and bred Pole who speaks English without any Polish accent. But he is a charming man; much more charming than Alan Bates' H.J. However, we don't get to see much of him in this film. 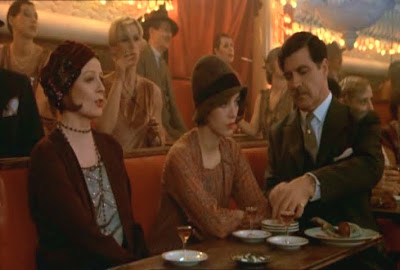 
Quartet should have been called "Trio," because Stephan is a mere benchwarmer in a game mostly played by Marya, H.J., and Lois. The film is based on an autobiographical novel by Jean Rhys, whose life story looked much more interesting than that of Marya's. Rhys was a novelist who had an affair with the married Ford Madox Ford. Her story is kinda like that of Camille Claudel's (as portrayed in Bruno Nuytten's film).

Isabelle Adjani is a brilliant actress. But that brilliance seemed elusive in this film. Maybe it's because her character is so thin. Maybe it's because she gave her all in Possession, that's why there's nothing left for Quartet. Or maybe it's because she's intimidated by Maggie Smith's presence. I don't know. Her line delivery is usually flat, to the point of being emotionally monotonous. (Check out her "Why not? Why not?" scene.) This is just not one of her best performances.

I can see why Maggie Smith is Maggie Smith. She carries her character very well. Smith perfectly exhibits the traits of a British aristocrat, and she also makes us feel Lois' heartbreak. Her breakdown scene is remarkable. As a big fan of Isabelle Adjani, I hate to say this, but Smith stole the show from Adjani.