The Battle of Good Vs. the Thick Pea Soup 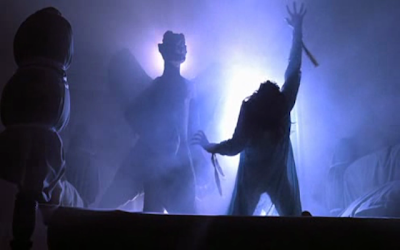 To rotate your head 360 degrees is one thing. To be considered as a great film after all these years is to be The Exorcist. William Friedkin's most popular film tackles the not-so-new subject of good versus evil. This time, Friedkin adds his own blend of spice to one of the overused plots in the history of cinema.

With this film, Friedkin seduces us with his knack for subtle scenes, then breaks our hearts by showing us scenes even the most unfeeling person would be shocked to see. The film stars Ellen Burstyn, Linda Blair, Jason Miller, and Max von Sydow.

The first scene introduces us to the title character, who is generally addressed in the film as Father Merrin (Bergman actor Max von Sydow). We can see him at an archaeological site in Iraq. Father Merrin is an experienced exorcist who is currently not in the pink of his health. Meanwhile, Chris MacNeil (Ellen Burstyn) is a film actress on location in Georgetown, Washington. She's also a doting single parent to Regan (Linda Blair), a pampered 12 year-old girl.

All seems well until Regan manifests a bizarre behavior and a horrific physical change. Medical and psychiatric treatments don't work. Believing that Regan is possessed by a demon, Chris seeks the help of Father Karras (playwright Jason Miller, actor Jason Patric's father). Karras is a Jesuit priest who also happens to be a psychiatrist. Incidentally, Father Karras is also battling his own demon. He feels guilty about his mother's death, and thinks that he is losing his faith. Father Karras tries to convince the Church to let him do an exorcism on Regan. Father Merrin enters the picture again.

The Exorcist might scare the audience by illustrating how strong evil can be, but it also gives us a pat on the back by showing us that evil can be fought. If evil is powerful, so is faith.

The film also features one of the sweetest mother-daughter relationships onscreen. Chris is not a typical actress-mom; she stayed with Regan through thin and thick pea soup. William Peter Blatty based the characters Chris and Regan MacNeil on Shirley MacLaine and her daughter (no, MacLaine's daughter is not possessed). 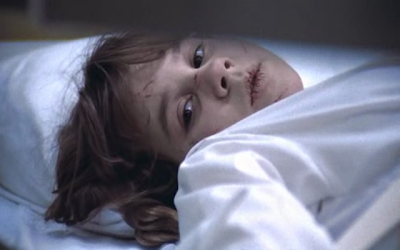 A 13 year-old Linda Blair, who injured her back during filming, is simply remarkable as Regan. Her transformation from a sweet little darling to a possessed creature is incredible. The Exorcist wouldn't be as scary as people think it is if it weren't for Mercedes McCambridge's performance. McCambridge is astounding as the voice of the possessed Regan. Ellen Burstyn gave a very good performance as (the usually hot-tempered) Chris; this is definitely one of her best performances. But The Exorcist turned out to be Linda Blair's show.

Cinematographer Owen Roizman pays homage to the film noir genre; we can see quite a lot of shots that spell "film noir." Dick Smith's work is astounding. Who would have thought that Father Merrin is played by a 43 year-old actor?

The musical score gives you that "shivers down the spine" feeling. The film features Mike Oldfield's Tubular Bells, a track that probably wouldn't be this popular if it weren't for The Exorcist. (It actually works both ways. I also have to give credit to Mike Oldfield and his popular piece; The Exorcist wouldn't be as eerie minus Oldfield's Tubular Bells.) 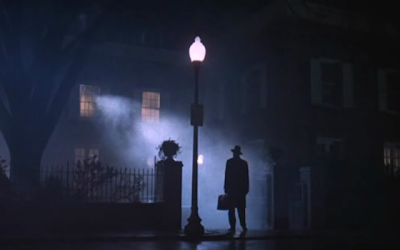 The Exorcist was a huge hit when it came out in 1973. It also inspired a lot of films. A year after the film's release, a Turkish film called Seytan came out (it's basically a frame by frame photocopy of The Exorcist). Around the '90s Linda Blair starred in Repossessed, which is a hilarious take on the film that made her famous.

For me, The Exorcist is not that scary. It's disturbing. I found the film disturbing because of the fact that demon possession happens in real life. Evil is real, and it's everywhere. And The Exorcist was able to show me that.


Trailer for The Exorcist: