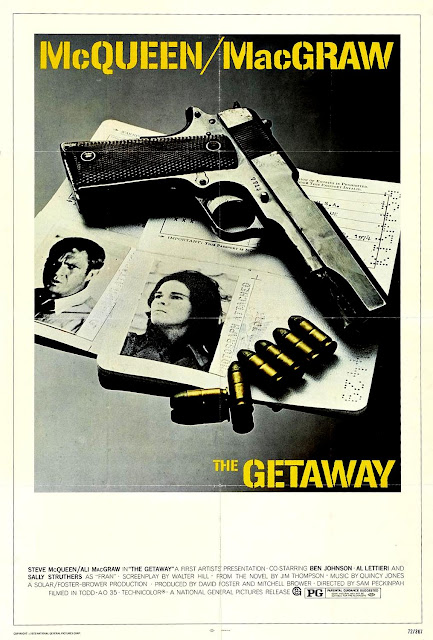 One of the hottest Hollywood couples back in the day, Steve McQueen and Ali MacGraw used to be what Brad Pitt and Angelina Jolie are today. At the height of their real-life romance, McQueen and MacGraw starred in Sam Peckinpah's The Getaway, a 1972 heist film about a couple on the run from the bad dudes.


McQueen and MacGraw star as Doc and Carol McCoy. (There's a lot of "mac" going on in this movie.) After Doc was granted parole, Mr. and Mrs. McCoy find themselves deep inside the sh*thole of bank robbery and double crossing. And so they find out a way out, which proves to be a difficult thing.

The film's theatrical poster shows Doc and Carol's passports, with a Colt .45 pistol (I think) and six bullets on top. One of the simplest yet intelligent movie posters I've seen, the artwork aims to summarize the film's title and storyline. Doc and Carol try to get away from their past by going to Mexico, yet on top of them is a criminal history they can't seem to avoid.

The film was later reduced to scrambled eggs with a 1994 remake starring then-couple Alec Baldwin and Kim Basinger.