"Serbis" is Out of Service 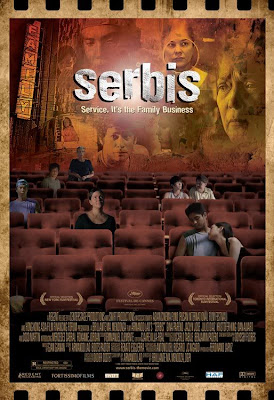 An obviously photoshopped poster for Serbis.
(Photo belongs to its owner/s. I don't own or claim to own this photo.)

Tagline: Service. It's the family business.

The story looks promising. Serbis definitely has a story to tell, but Brillante Mendoza doesn't know how to tell it properly.

Sure, the film was able to show the ugliness of the movie theater, but it takes more than a good set for a film to be effective. The veteran actors (Gina Pareño, Jaclyn Jose, and Julio Diaz) didn't disappoint me. It's kinda amusing to see Mr. Diaz playing a dorky character. Coco Martin is weak, weak, weak!!! Everyone can see that he's a pretty boy with a gorgeous body, but he's just unbelievable as Alan. He looks like he's in a classroom. Coco delivers his lines without feelings, he's very reminiscent of a student reciting in class. The rest of the actors looked very amateur to me.

The extras looked like extras. They seemed to be aware that they're in a film, they just can't help but look at the camera. Maybe Mendoza can learn something from Werner Herzog when it comes to dealing with extras. During the filming of Nosferatu the Vampyre, Herzog filmed his extras without them knowing it because he thinks that, "Extras always look like extras. But this way, they'll look like people who work." 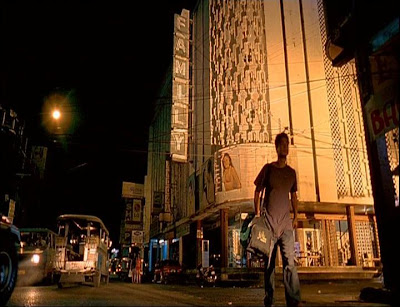 The facade of the Pineda family's movie theater.
Coco Martin sleepwalking through his character.

What good is an excellent set if the characters are inaccessible? It's hard for me to connect with the characters because most of the actors are dull. But it's not their fault, it's the director's. The director should control everything in his film, including the actors. If he fails to get the best out of his actors, that's the time he should stop making films.

The shakiness of the camera made me dizzy. The use of the hand-held camera seemed like another desperate attempt. This time, a desperate attempt to spoof the Dardenne brothers. Remember Rosetta? (If I'm not mistaken, the shaky camera was one of Roger Ebert's complaints in his review of Mendoza's Kinatay.)

I wanted to like Serbis, but it's just unlikable. I think this film would be better if:

Serbis did a very good job in annoying me and wasting my time. If you're going to watch a movie about family problems, please make sure that their problems are worth wasting time. This film tries too hard to be realistic and profound to the point of being ridiculous. Serbis is not realistic and profound, it's pretentious and boring.

Serbis didn't look like a family portrait to me, it looked more like a 90-minute torture. It's an agony to watch such a flimsy film. Being an entry at the Cannes Film Festival does not guarantee that a film is good.

There are better Filipino films out there, just skip this one. Serbis is one of those Filipino films that made me say, "How I wish that the Philippine cinema can go back to its golden era (the '70s)."

EDIT: Mendoza also pays tribute to Ingmar Bergman with the "film break" scene by the end of this film.