This One Brought Tears to My Eyes 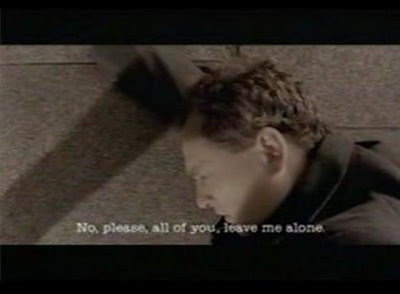 "One day I'll get to you
And teach you how to get to purest hell."

A man suddenly lies down on a busy pavement, people ask the man what's wrong and why is he lying there. We don't hear their voices because Radiohead's Just is on. We follow their conversation through subtitles. The man refuses to answer their questions. The people persistently demand an answer from the man.

The man gives up and says, "Yes I'll tell you, I'll tell you why I'm lying here... but God forgive me... and God help us all... because you don't know what you ask of me." The camera zooms in on the man's mouth as he finally gives the answer to the people's questions. The subtitles suddenly stop, so the man's answer is not revealed. The camera zooms out showing the crowd of people lying down the pavement, just like the man.

Just is a puzzle, but it's not tiring to watch over and over again. Honestly, I still don't get the meaning behind the film; or maybe it doesn't have any, or maybe it's merely a plot device. There might be an intrinsic meaning behind the man's words towards the end of the film, that's why the crowd also laid down the pavement.

This must be director Jamie Thraves' masterpiece. I liked his music video for Anna Molly by Incubus, but I LOVED his work for Radiohead's Just. I loved it so much that it brought tears to my eyes, it's so overwhelming. After all these years, I'm still generating theories in my head about what the man said.

Watching Just is analogous to watching a film by Luis Buñuel or looking at a painting by Salvador Dali or Pablo Picasso. Just is a vague film yet its obscurity is arousing. One word: MIGHTY.