You'll Never Know What's in The Package Until You Open It 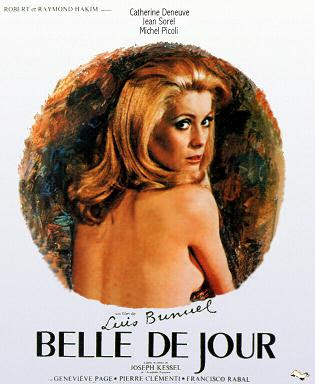 This film was probably daring during its time. It's not afraid to be spontaneous with the plot execution. Directed by celebrated Spanish filmmaker Luis Buñuel, Belle de jour tells the story of Severine Serizy, a young married woman who enlists in the employ of a whorehouse, without the knowledge of her husband, Pierre (Jean Sorel). Severine obtains the name "Belle de jour" (Beauty of the Day) as a prostitute. She works only during the mid-afternoons, hence the name. 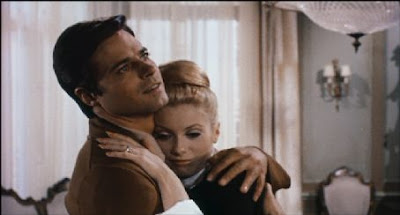 Jean Sorel as Pierre and Catherine Deneuve as Séverine

Based on a novel by Joseph Kessel, Belle de jour is a character-driven film that illustrates both the main character's fears and fantasies. There are dream sequences in the film that shows Severine's sexual frustrations. One might not understand why Belle de jour Severine worked as a prostitute, despite of her social status.

While one might assume that she did that out of boredom and curiosity, and eventually conclude that Severine or Belle de jour is nothing but a bored and spoiled rich bitch, the film makes you ask quite a lot of questions. Audiences have to dig deep into Severine's thoughts in order to relate with the things she does. You'll never know what's in the package until you open it — that's exactly what surrealism is all about: digging deep in order to understand and appreciate the film.

And, my oh my, is Catherine Deneuve hot or what?!? She's simply cute in Roman Polanski's Repulsion, but she's "classy beautiful" in this film. From a frail young woman in Repulsion to a chic and sophisticated woman in Belle de jour — that's quite a transition for La Deneuve.

Miss Deneuve's character in Repulsion, Carol Ledoux, and her character in Belle de jour have quite something in common: they are both sexually repressed that's why they have those fantasies. The only difference between the two characters is that Carol is deranged, but Belle de jour or Severine is not.


Tailored by renowned fashion designer Yves Saint Laurent (Christian Dior's protégé), Catherine Deneuve's outfits in this film are fabulous. It kinda reminds me of Audrey Hepburn's Givenchy outfits in Charade. Ms. Deneuve was actually YSL's fave model. Before I talk fashion, why don't you guys check out Señor Bunuel's Belle de jour, and see the beauty within... whatever that means.

My rating: 4/5 - Belle de jour is one of the best surrealist films I've ever seen.

so you do love classical movies, huh? :-)