Cinematography: All That Heaven Allows 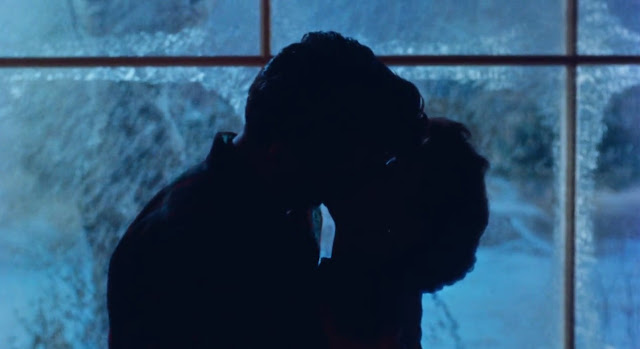 One of the most beautifully shot films, I believe, is Douglas Sirk's All That Heaven Allows. Starring Jane Wyman and gay icon Rock Hudson, this romantic drama has an upper-class widow (Miss Wyman) and a younger nurseryman (Hudson) falling in love with each other.

Rainer Werner Fassbinder remade All That Heaven Allows as Ali: Fear Eats the Soul, while Todd Haynes paid homage to Sirk's masterpiece via Far from Heaven.

The film that put Sirk on the Hollywood map, All That Heaven Allows is armed with well-written screenplay and notable performances (especially by Miss Wyman). But the thing that made this a standout classic is Russell Metty's cinematography, which heavily inspired Edward Lachman's work in Far from Heaven.

Filmed in Technicolor, All That Heaven Allows' most dominant color is blue, although Metty mixes some playful colors throughout the movie. 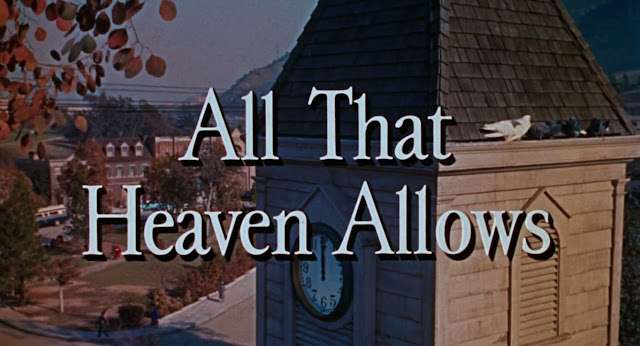 The opening credits for the film has an aerial shot because it's All That *Heaven* Allows.
The camera pans to show us around the suburb. The clock strikes at twelve to signify a major turning point in Cary Scott's (Jane Wyman) middle-aged life. Perhaps it aims to point out that she is at "the afternoon of her life," therefore she shouldn't be wasting her time being unhappy.

Allow yourself to behold such visual heaven... 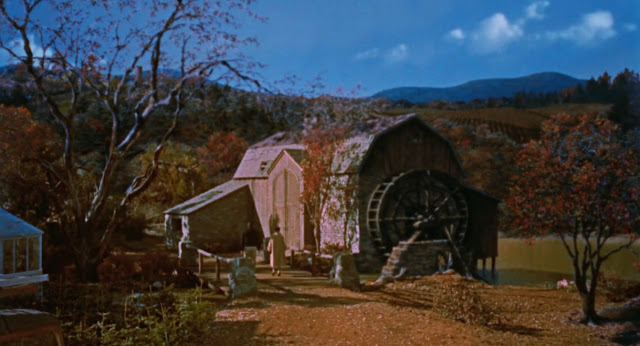 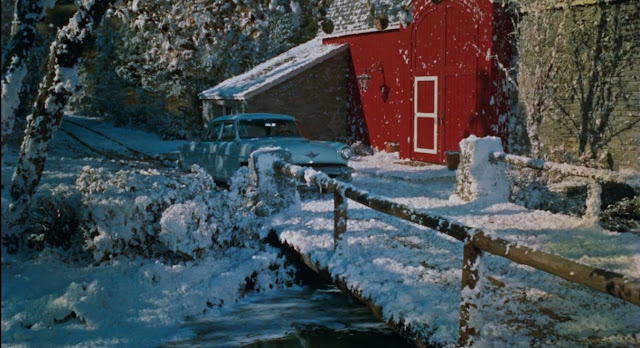 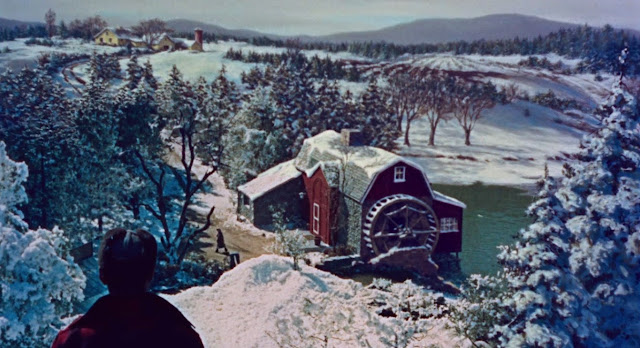 That red barn though. 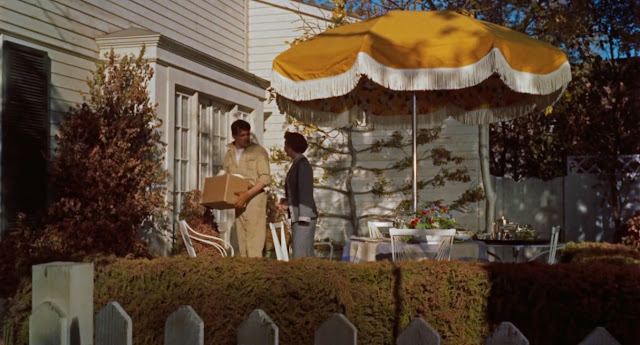 Mellow yellow.
This shot oozes warmth it made me like yellow, and I'm not even a fan of such color. 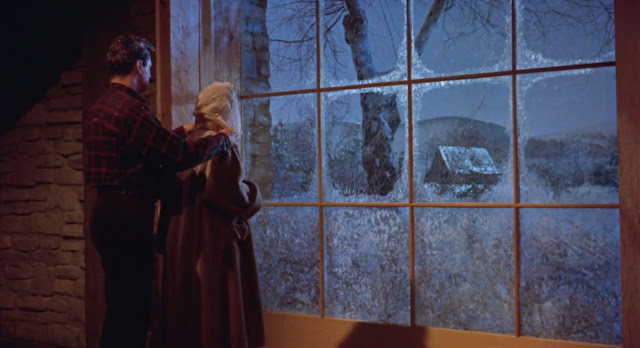 Cary and Ron's romance bloomed in autumn and then withered during winter. Metty uses blue to emphasize the main characters' cold heartbreak. (Blue is not the warmest color in this case.) Because of social backlash, Cary and Ron experience "the winter blues." 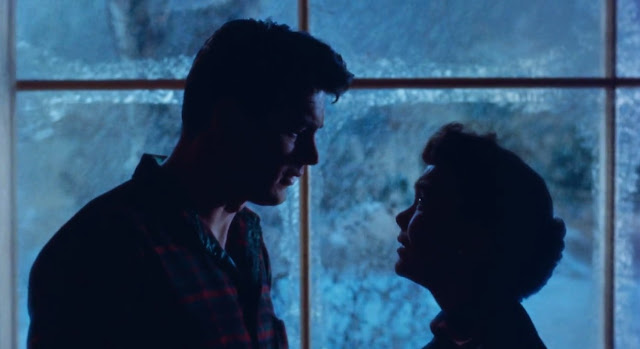 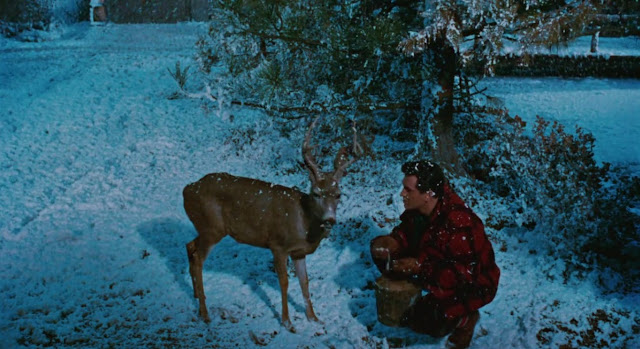 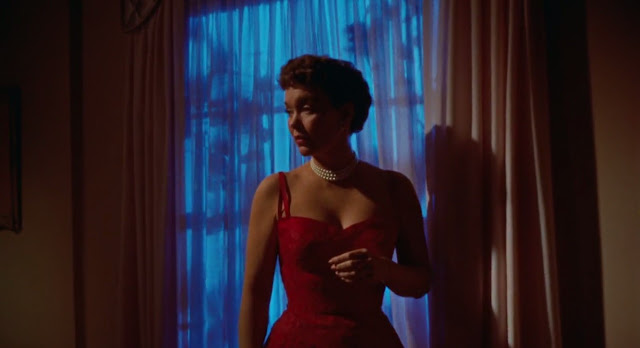 I like how the blue window complements Cary's red dress. 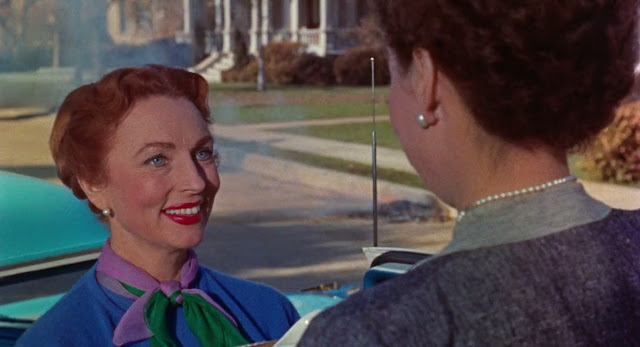 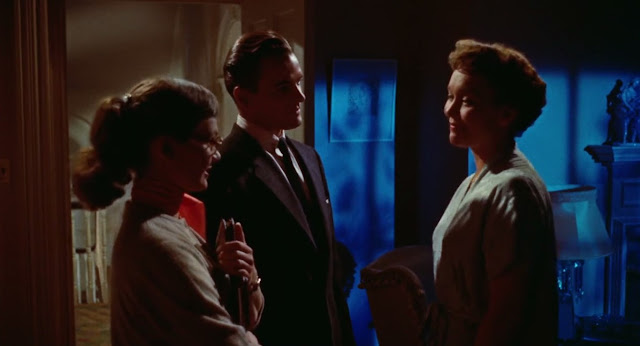 Metty's work inspired a lot of films including West Side Story. 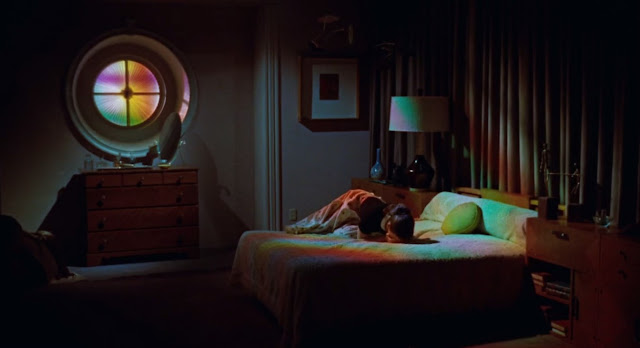 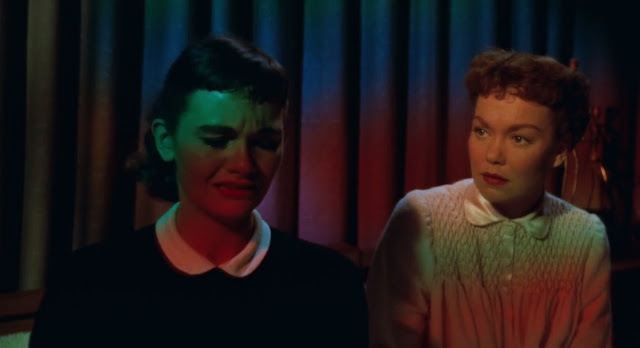 Rainbow is often considered as a happy color.
This shot contradicts that happiness as Kay (Gloria Talbot) cries against the rainbow reflection. 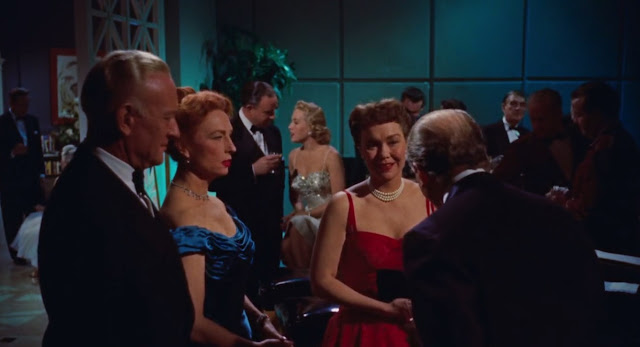 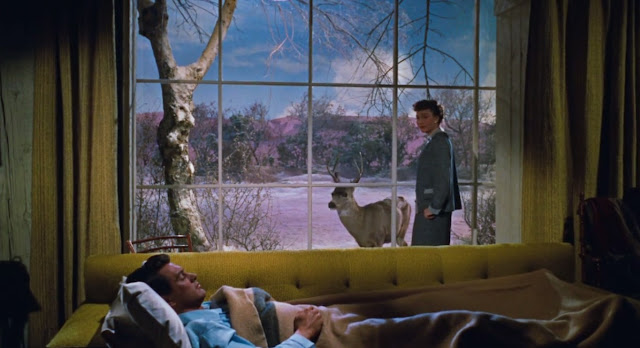 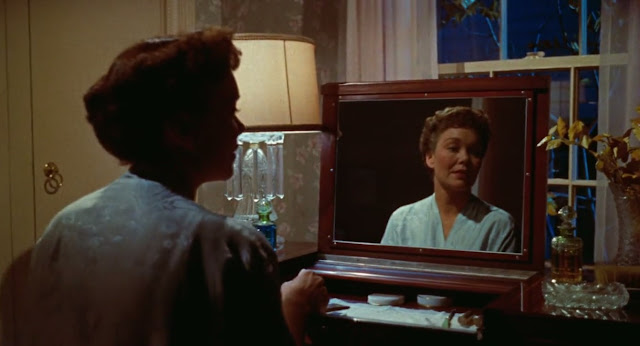 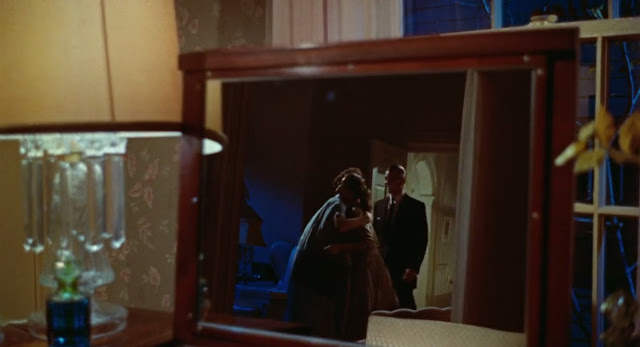 Wish I could make a GIF of this particular shot.
It's smart how the camera focuses on the mirror as Cary greets her children. 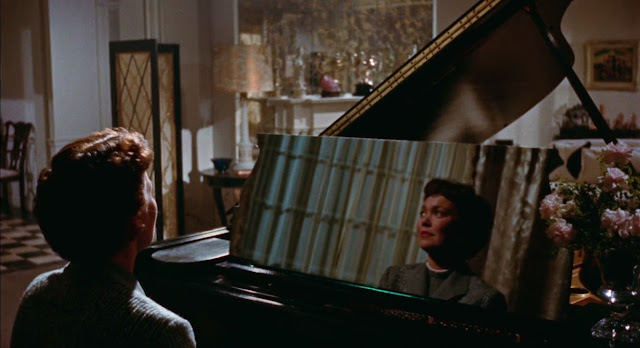 We often see Cary's mirror image, but we never see her look at it. Cary is trapped in society's norms, keeping up appearances so that everyone's happy — therefore she refuses to "look at her real self." 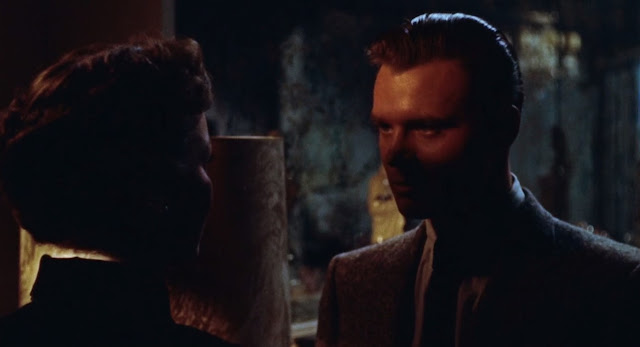 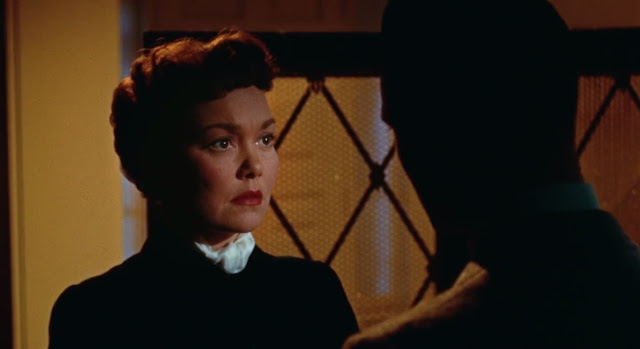 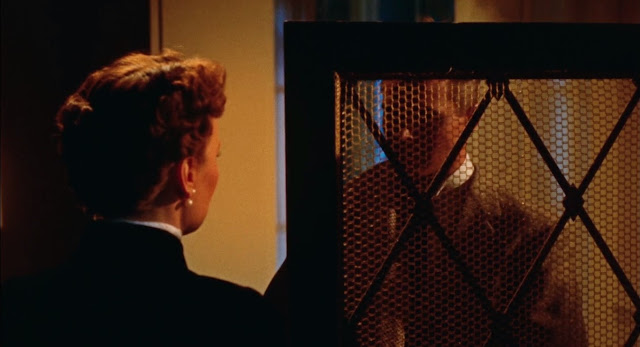 During the mother-son confrontation, Ned (William Reynolds) is always obscured. That's because his mind is obscured by social ideals. He chose to "stay in the shadow" and conceal the truth that his mother is "unconventionally in love."

In this shot, Cary is the one who is obscured as a silhouette after she finally succumbs to society's norms... 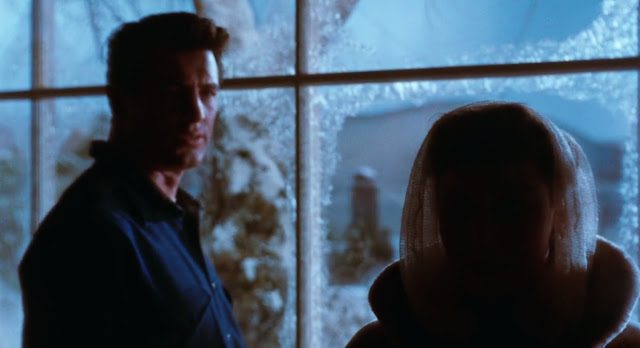 Cary is on the right side of the shot. After breaking up with Ron, she might be on the "right side of society" again, but she is "in the dark"... shrouded by social norms.

Metty and the art of silhouettes... 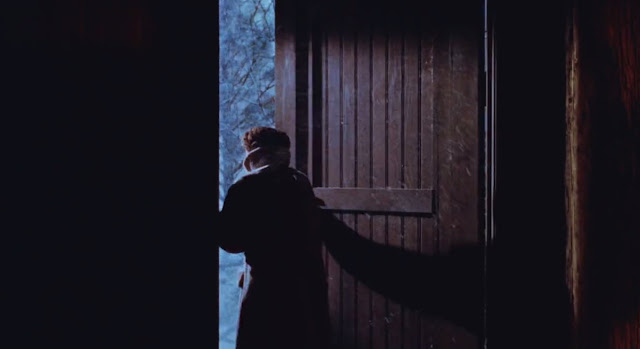 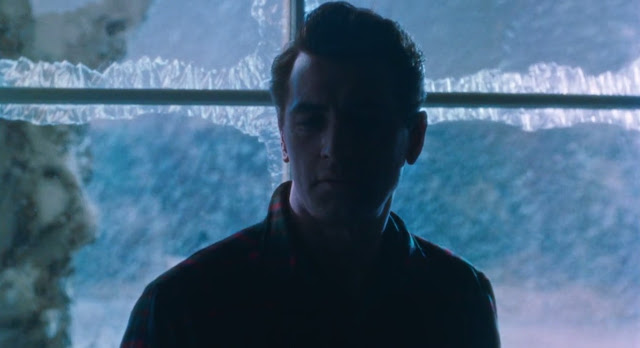 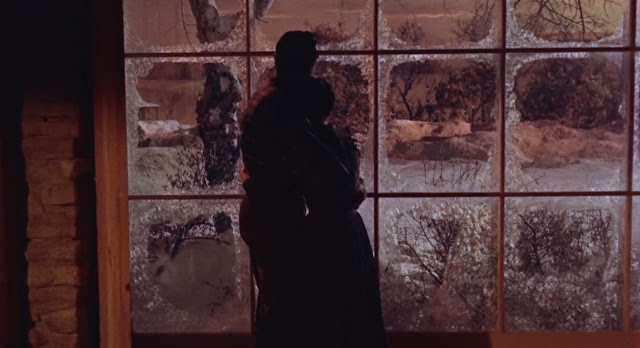