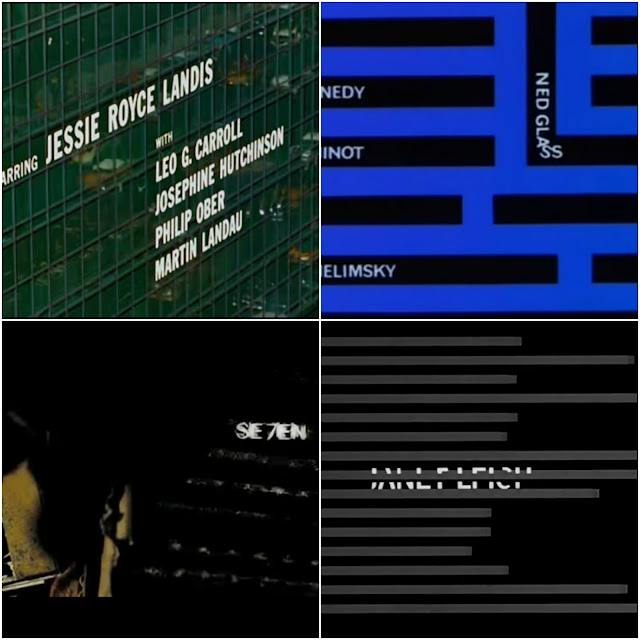 Title sequence is that part of a movie (or TV show) wherein the title and key cast and production members are listed, often incorporating creative visuals and compelling music. Most title sequences aim to set the mood of a film. Some title sequences come before or after a prologue, while some serve as the prologue itself, giving you a glimpse of what the film is about.

It may include a simple series of drawings (e.g., The Spirit of the Beehive), live action (Lord of War), animation (Pink Panther, Catch Me If You Can, etc.), a montage (e.g., Persona), or a combination of live action and animation (e.g., Juno). Sometimes, a simple Jack-o'-lantern on the corner and some creepy music will do (case in point: Halloween). Some movies choose not to have a title sequence at all and just display the title without music (e.g., Citizen Kane).

Being the film buff that I am, I compiled my top 13 favorite title sequences. Legendary graphic designer Saul Bass is basically the father of title sequences, that's why you'll find some of his works on this list.

Probably the most innovative Bond title sequence, Casino Royale deviates itself from its predecessors by having a different gun barrel sequence. Utilizing both animation and live action, the film's title sequence features Bond fighting some bad guys while cards float around to symbolize one of the movie's main themes (gambling).

Unlike other Bond title sequences, this one doesn't have Bond ladies dancing along the music. Bond lady Vesper Lynd (Eva Green) briefly appears as the Queen of Hearts, emphasizing her significance in 007's life instead of objectifying her as title sequence decor. Chris Cornell's You Know My Name also gives Bond a new, tougher attitude.

Before he designed those Bond title sequences, Maurice Binder made this catchy intro for Charade, a Hitchcock movie Hitchcock never made. Along with Miss Audrey Hepburn, the film's title sequence is a sight to behold. And then there's Henry Mancini's classic musical score. Binder's work would later inspire the title sequence for OSS 117: Cairo, Nest of Spies.

Okay, so this one still has the dancing Bond ladies in it. What made me enjoy this title sequence is its clever design. Breathing out gun smoke, smoking a cigarette, and then a gunshot from the mouth --- awesome. Oh yes, Tina Turner's GoldenEye is also my most fave Bond song. So there.

This is one of Saul Bass' most notable works. It has playful animation, which aims to show the rat race universe in a fun way. At the beginning, we could see the characters (their "hands," to be exact) trying to get ahead of each other by putting their actor's name on top, disregarding the "in alphabetical order" text. Spencer Tracy waves his flag, but a bigger hand shuts him right back inside the "globe." It is indeed an entertaining start for a comedy.

Backed by Buffalo Springfield's For What It's Worth, the film's ingenious title sequence shows the life of a bullet --- from its production to its appetite for destruction. From the bullet's "point of view," we see the tragedy of this blood-thirsty world.

When you combine the minds of Alfred Hitchcock, Bernard Herrmann, and Saul Bass, you'll have some of the most memorable title sequences ever (this one and Psycho). Bass superimposes the texts over a glass building, while Herrmann's fast-paced music exudes a cat-and-mouse game kind of feeling. Don't forget to catch Hitchcock's cameo at the end.

This title sequence was probably inspired by Saul Bass' work for North by Northwest (texts on a building and all). I like how this immediately evokes a sense of claustrophobia by merely having shots of some NYC buildings. Gee. Never has New York felt as suffocating as this.

Ah. The quintessential Hitchcock movie. Psycho is iconic in every way, from its title sequence up to its final scene. Bernard Herrmann's eerie music and Saul Bass' visuals make this title sequence as haunting as Norman Bates' mom. The erratic movement of the stripes represents Norman's psychotic mind. Creepy.

With a plot similar to It's a Mad Mad Mad Mad World, Rat Race features a catchy title sequence that has the main characters playing tricks on each other. Cute and funny. As Baha Men sings "what is liii-iii-fe?!" in the background, we are given pure comedy right from the start.

Designed by Kyle Cooper and backed by a remix of Nine Inch Nails' Closer, Se7en's intro signaled the comeback of glorious title sequences. I saw the film as a child, after being warned of its violent theme. And this title sequence immediately captivated me as a curious audience. It's as if John Doe is letting you inside his twisted world. 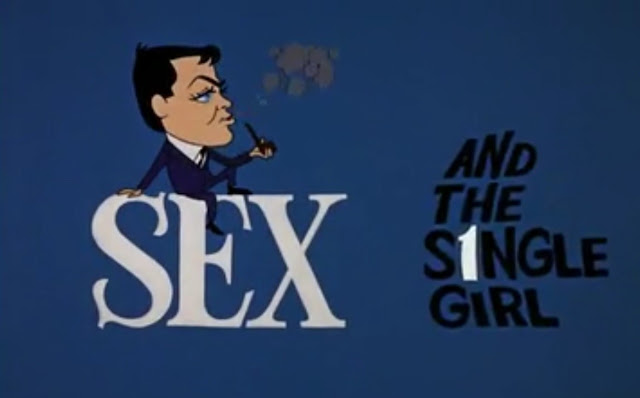 Sex and the Single Girl is a comedy starring Natalie Wood and Tony Curtis. Its title sequence echoes the witty mood of The Pink Panther. Since this is not a well-known film, I couldn't find any video for its title sequence. It uses animation and features a battle of the sexes, which is one of the film's main themes.

I saw this film in a movie theater, which is a perfect venue to marvel at the title sequence's dominantly dark graphic novel-inspired visuals. Robert Rodriguez's musical score also makes the title sequence extra awesome.

Highlighted by Bob Dylan's The Times They Are a Changin', Watchmen's title sequence chronicles the history of the superheroes. Although Watchmen is an action movie, its title sequence has a particularly sad feel to it.

This title sequence is also notable for its alteration of some of history's significant moments; JFK was shot by The Comedian (Jeffrey Dean Morgan), and the VJ Day Kiss in Times Square had a lesbian couple instead of the hetero ones.

I also like how some of the song's lines perfectly describe the images shown; "Don't criticize what you can't understand" is sang as we see the lesbian couple's bloodied corpse after a hate crime. Watchmen is what happens when a superhero movie also works as a "history lesson."