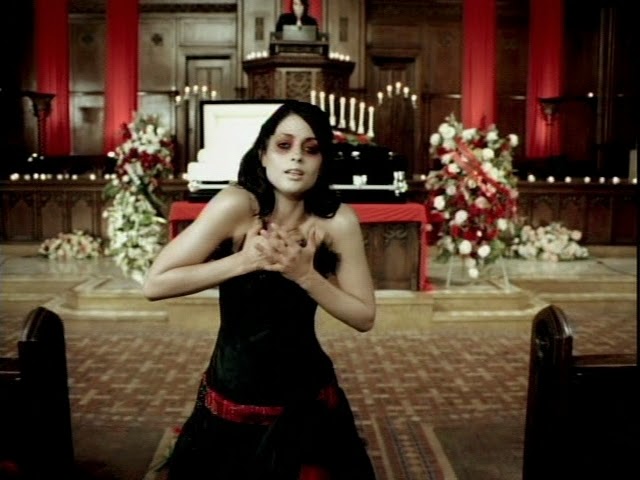 Some nine years ago, there was this music video I found rather weird yet addicting. It shows a dead lady (dancer Tracy Phillips) who wakes up in her casket, dances on a church aisle while people mourn over her death, then she goes back to her casket. There's also a group of emotional dancers stealing the show, turning the lady's funeral into a quasi Pina Bausch spectacle.

For the most part of the video, there's this emo goth guy (My Chemical Romance vocalist Gerard Way) singing his heart out. The song goes: "What's the worse that I can saaay?! Things are better if I stay. So long and good night. So looong and good night."

Song's name is Helena, the same lady who woke up at her own funeral. The video was helmed by Marc Webb, the renowned music video director who would later reunite with Miss Phillips in (500) Days of Summer.

Despite its over-the-top presentation, the video — just like the song — is sad. Webb uses black and red as the video's dominant color. Black is to death, as red is to love. Way's character is utterly despondent over the death of his love, Helena.

For the rainy scene outside the church — as the pallbearers carry Helena's casket — blue dominates the video; maybe to signify that Way is already coming to terms with Helena's departure. The name "Helena" means "shining light." Helena might be physically gone but her memory will forever radiate Way's life.

The most heartbreaking moment is the very last scene: Way looking through Helena's hearse, as the guitar riff fades out with the video. A well-edited scene that evokes a sense of grief.

The song's title and video kinda remind me of Helena Belmonte, a Fil-Am model who reportedly jumped to her death from her 28th floor condominium.

Although Way said that the song is a tribute to his late grandma, one can't help but think of it as a breakup song or an elegy for a departed someone.

Way's acting is a bit exaggerated at times, but it's not that bad for a non-professional actor. Phillips is remarkable as Helena. She has that natural charm which complements the video's elegiac tone.

Webb is bold and sentimental in conveying the song's feelings. He and his cinematographer did a good job with the video's imagery; it has that special something that can stay with you for quite a long time.