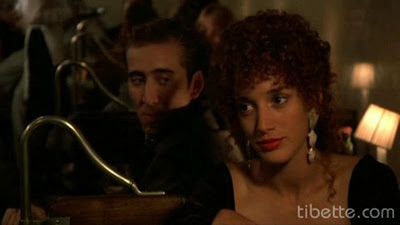 Have you ever had a moment of unexplainable emptiness? You sure have. That feeling of nothing. Ah. Don't we just hate that? We keep on doings things on a daily basis. We wake up, go to work, hang out with friends, etc. We do all these for what? For money? For love? For the future? For what, exactly?

Peter Loew (Nicolas Cage) of Vampire's Kiss might not even know the answer. By the way, Peter is a publishing agent in New York City. A yuppie consumed by his life's emptiness. Peter spends most of his day at work. At night he barhops and dives into a series of loveless sexual encounters. Peter lets his frustrations out by constantly bullying his secretary, Alva (Maria Conchita Alonso), berating her as often as possible. To keep his sanity intact, he regularly consults a psychiatrist (Elizabeth Ashley). One night he meets an attractive woman named Rachel (Jennifer Beals), whom he believes has turned him into a vampire.


Director Robert Bierman did quite an impressive job in balancing the story's humor and tragedy, although I think the film aims to veer more towards its comedic side so that the audiences won't feel too depressed about an already depressing story. Joseph Minion's screenplay is well done; the lines are witty and oftentimes satirical. Peter's monologue on Alva's "horrible job" is so right on. Although Peter aims to criticize Alva and her job, the monologue actually creates a sneaky criticism on Peter's full-of-nothing existence.

With Stefan Czapsky's impressive cinematography and Colin Towns' ambient music combined, Vampire's Kiss was able to present the Big Apple in a rather moody tone. It's a good thing the film was set and shot in New York City — an ideal place to make or break one's self, in my opinion. One shot that quite impressed me is the one wherein Peter recites the English alphabet to his psychiatrist; that frame was kinda breathtaking because of the way the camera moved and tried to show Peter at the pinnacle of his building of insanity. Another shot that impressed me is the "well, fuck you too sister" scene. That is a complete statement of Peter's emotional isolation and mental decline; the sunlight complemented Peter's black outfit and his pad's dark motif. 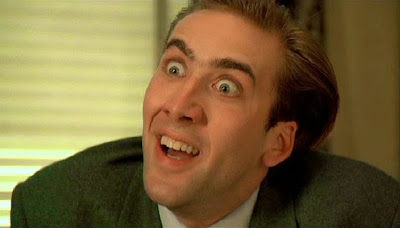 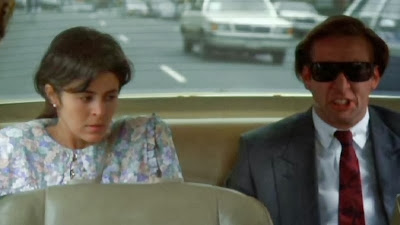 Vampire's Kiss is Nicolas Cage at his boldest and funniest. Oh my. I've always thought of Cage as a somewhat lame actor. I guess he's not. He's a perfect fit for this character because he was able to deliver Peter's two sides in an amusing manner; it's as if Peter was played by two different actors. He should do more parts like this. Cage is a good comedian. Maria Conchita as Alva is quite entertaining too. She was able to drop her bombshell image to emphasize the naivete of the old-fashioned Alva. Jennifer Beals doesn't have that much of a screen time. Her acting is sometimes a bit off. (Must be because Rachel wasn't characterized that much.)

1988's Vampire's Kiss is a good existentialist film dressed in a tragicomedy outfit. I think it's called "Vampire's Kiss" because of the way Peter sucks the life out of himself. The film aims to show us the nothingness most of us (subconsciously) create for ourselves. Meaningless pursuits — sounds familiar?