A Superb Drink Up to the Last Sip 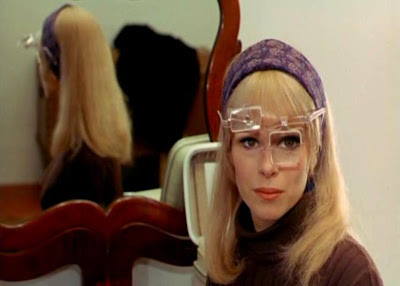 Geraldine Chaplin radiates grace in almost every film she's in. That's why I forgive her for taking part in that junk called BloodRayne. I've always been entranced by Chaplin's screen presence. And after watching Cría cuervos, I was intrigued to see more of Carlos Saura's films. So I checked out Peppermint Frappe, his first of nine films with Chaplin.

Saura's film is a haunting tale of obsession, love triangle, and downward spiral. It tells the story of Julian (Jose Luis Lopez Vasquez), a balding, middle-aged radiologist who seems satisfied with his single life until Elena (Geraldine Chaplin) comes along. Elena is the cosmopolitan, blonde young wife of Pablo (Alfredo Mayo), Julian's childhood best friend. Julian seriously believes that he'd already seen Elena before; he insists that she's the drummer girl he saw during the Holy Week ceremony in Calanda. Julian falls madly in love with Elena because she embodies his type of woman: vibrant and sophisticated. Julian persistently seduces Elena, she persistently turns him down.

Meanwhile, Ana (also played by Chaplin) harbors a secret crush on Julian. She is his timid, brunette assistant. Ana looks a lot like Elena, at least in Julian's point of view. Pablo didn't see any resemblance between Ana and his wife, so I suppose it's only in Julian's mind that the two women look alike. Unsuccessful with Elena, Julian persuades Ana to wear chic clothes and dye her hair blonde. He wants her to become someone she is not: Elena. 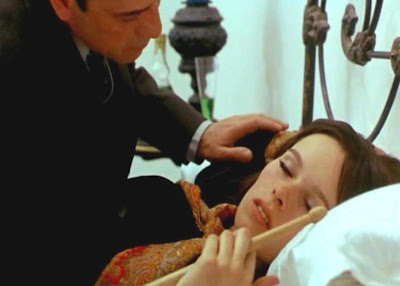 Lopez Vasquez and Chaplin as Julian and Ana

At first it seems like Julian is the one who's manipulating Ana, but it's actually the other way around. Ana utilizes Julian's grief for her own sake. As long as Elena keeps on dumping Julian, Ana has him wrapped around her finger. So it's Ana, not Elena, who serves as the film's femme fatale.

Chaplin is remarkable. She's enchanting as the heartbreaker Elena, intriguing as the shy but wicked Ana. One of my favorite scenes is the one wherein Elena sings a lullaby to a worn out doll. That scene boasts with tenderness, which adds more tragedy to Elena's fate. Chaplin absolutely nailed that scene. Like Remember My Name and Nashville, this film features one of Chaplin's best performances.

Lopez Vasquez was impressive as Julian. He was able to make Julian look very annoying. Julian is a pathetic chauvinist who is also irritatingly childish. He's like a brat who would do anything to get what he wants. And if he doesn't succeed, all must vanish. Julian is probably one of the most vile characters ever filmed. Even my mom finds him despicable.

The peppermint frappe in the title refers to Julian's favorite drink, which is also used as a plot device. The film's pacing is very smooth. From a rather quiet drama ensues a startling finale. Peppermint Frappe has one of the shocking yet exceptional endings I've ever seen. The last 23 minutes of this film always make me shiver.

Just like Stanley Kubrick and Wong Kar-wai, Saura has a good taste in music. He chooses songs that cause LSS; Jeanette's Porque te vas in Cría cuervos, and Los Canarios' The Incredible Miss Perryman in this film. Cinematographer Luis Cuadrado lets us explore the enigmatic city of Cuenca.

Although Peppermint Frappe was dedicated to Luis Buñuel, whose sensational Belle de jour was also released in 1967, Saura's film has a strong Hitchcockian vibe in it. But Peppermint Frappe still has a unique blend of its own.

The film was shot in Spain during Francisco Franco's reign, and is said to criticize Franco's regime. (I guess the Julian character aims to represent Franco.) I didn't see Peppermint Frappe as a political film. I saw it more as a pure work of art; truly outstanding in its essence. 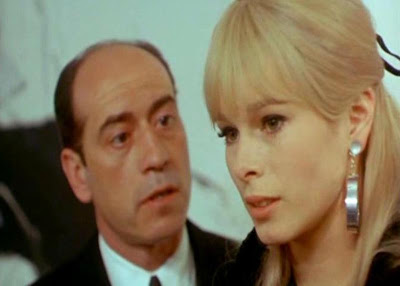 Peppermint Frappe is a multilayered film. It starts off as a bittersweet romance, eventually veers into drama, gravitates toward mystery, and brilliantly transforms into a psychological thriller. Saura effectively mixed those ingredients to create a disturbing, excellent film.

So grab your Peppermint Frappe and let's cheers! ;)