Was Zulawski possessed by Bergman?

by That Film Enthusiast
It's quite possible that some of Ingmar Bergman's visceral yet outstanding works inspired Andrzej Zulawski's nerve-racking but impressive 1981 film, Possession. Here are my reasons why.


1. The monologue of two Annas. Zulawski's Anna talks about faith and chance, cancer, madness, and her dissolving love for her husband. Bergman's Anna discusses the man in her life, her relationship with that man, and a ghastly accident. They may not talk about the exact same thing but their monologues are somehow identical. These women invite us to look into their soul. Both also look at the camera as if they're talking to the audience.

Left: Isabelle Adjani in Possession.
Right: Liv Ullmann in The Passion of Anna. 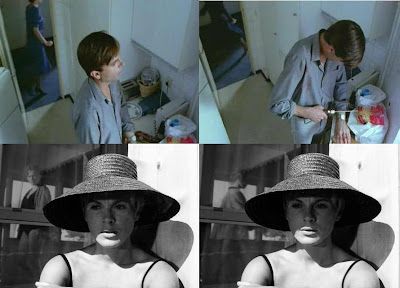 
4. Possession is an allegory for divorce (Zulawski's divorce, specifically). And Bergman's 1973 film, Scenes from a Marriage, deals with divorce.

Left: Neill and Adjani in Possession.
Right: Erland Josephson and Ullmann in Scenes from a Marriage.

Roman Polanski's 1965 thriller, Repulsion, might also be an inspiration:


Not only did Anna and Carol both kill two men, but the shot when Anna is beating Zimmermann also resembles the shot when Carol bludgeoned Colin.

Terrifically concise and interesting comparisons. As towering of a figure in cinema as Bergman is, although I don't know how much of a movie nerd Zulawski is, I wouldn't be surprised if they were intentional nods.

I agree. Bergman's bold exploration of the human soul became a benchmark for other philosophical filmmakers, like Zulawski.

I was just watching a documentary on the "video nasties" debacle in the UK which for some stupid reason Possession got caught up in. The reviewer talking about the title specifically says that he was directly influenced by Bergman's Scene's From a Marriage but felt there was an intangible element to the breakup of a relationship that couldn't be expressed in a conventional drama. Thankfully in the UK Possession now gets the artistic credit it deserves.

"but felt there was an intangible element to the breakup of a relationship that couldn't be expressed in a conventional drama."

- Exactly. I loved how Zulawski used Anna and Mark's violent descent into madness as a metaphor for breakup. Possession is one of the greatest breakup movies ever.