This "Film" Bored the Hell Out of Me 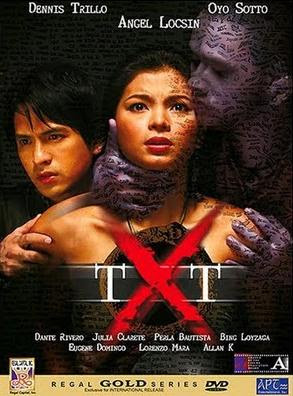 Plot: A jealous and angry soul comes back to haunt his girlfriend and her new lover. He haunts her and the people close to her by sending them sick text messages and calling them on their cellphone.

Wow! This one really bored the hell out of me... it absolutely did. "Camp" does not even begin to describe this!

A horror film — as this film calls itself — should keep its audience at the edge of their seat and should get more and more exciting as it goes on, not bore the hell out of them.

The plot's progress is very slow. I thought this film's gonna be stuck in the "sino kaya and nagti-text ng mga messages" stage, it wasted quite a lot of screen time in that part. Why not just stop beating around the freakin' bush and move on?!?

As for the acting, it's very average. Angel Locsin delivers her lines in a such a bland manner. Of all the film's lead actors, Dennis Trillo is the only one who gave quite a solid performance. But, unfortunately, even him cannot save this film from turning into a big pile of crap.

At times, Txt turns out to be ridiculous, even though it's not meant to be that way. The way the victims shake their heads every time they receive a call from Roman (Oyo Boy Sotto) is one of the funniest things I've seen onscreen. The lines are usually stupid. For example, Joyce (Locsin) is obviously mourning over the death of Roman, then here comes Ida (Julia Clarete) asking Joyce: "Okay ka lang ba?" HUH? Joyce is crying then you ask her if she's okay. Are you crazy or just plain stupid?!?

I especially dislike the fact that Txt blatantly markets on its lead stars' popularity (just like what most Pinoy films do lately), to the point of sacrificing the quality of the film.

Txt is a very predictable, pretentious, and unbelievable film. An unoriginal piece of filmmaking.