The Final Work of a Master 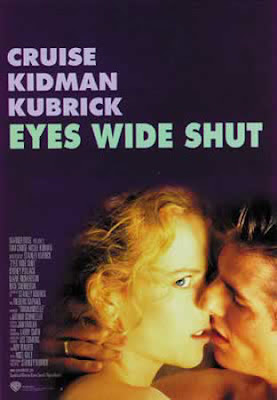 Eyes Wide Shut is the final work of celebrated film director Stanley Kubrick. It is also an intriguing look at the realities of marriage.

Bill Harford (Tom Cruise) is one of the top doctors in New York City. His wife Alice (Nicole Kidman) is an out of work art curator. They are both pretty. They have a lovely seven year-old daughter named Helena (Madison Eginton). They are financially stable. But beneath the attractive façade is a marriage threatened by temptation, suspicion, and jealousy.

Bill retaliates after learning from his wife that she almost cheated on him once. He goes out on an escapade in the middle of the night, walks the streets of NYC along with the image of his wife making love with the naval officer she had a crush on (of course, it's just all in his head).

Why would Bill retaliate when NOTHING really happened between his wife and that naval officer? An imagination out of jealousy and anger is all he got. And first of all, Alice shouldn't have told Bill about her secret fantasy. (I blame it on the pot though.) I know that honesty is an important factor in marriage, but I believe that there are some things that are better left unsaid. The things that the main characters do add more enigma to the already puzzling film. Surreal, especially with those dream-like scenes. Kinda Buñuelesque. 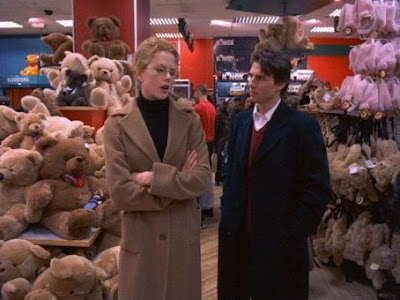 
Eyes Wide Shut is one the most obscure films I've ever seen. Some audiences might find the film obnoxiously graphic, slow, and profound. At first viewing, I found the film a bit slow and complex, maybe Kubrick meant for it to be that way. This is one of those films that gets better after second viewing. The scenes are well-placed.

The film is set in New York, but was actually filmed in England. It still looked like New York to me though. The cinematography is splendid. I especially liked the blue light illuminating Alice and Bill's bedroom. The soundtrack is hypnotizing and parfait. I've always been fond of Kubrick's choices of music in his films.

Tom Cruise and Nicole Kidman — still married — are almost perfect as a middle-class NYC couple facing the factors that can dismantle their marriage. Kidman gave a solid performance as the bored and (somehow) annoying Alice, but you hardly see her in the film. Her Alice character is almost like a backdrop to Cruise's Bill. Eyes Wide Shut is definitely one of Cruise's best performances.

Eyes Wide Shut is a perfect farewell from the genius himself.

I never really liked this movie. Hard to connect emotionally to it and not artsy enough to work by itself

There was a fascinating analysis of this film on youTube (since pulled).
In this analysis, the critic described Eyes Wide Shut as obeying dream logic, in which events moved in sequence, loaded with symbols. The strings of gold lights in the party sequence and in the costume shop denoted waystations, pauses before critical action.
When Nicole Kidman asks her husband about the host of the Christmas party, 'why does he invite us?', the second Cruise and Kidman separate, they get their answer - she is met by the suave older gentleman, he by two beautiful women. They are being seduced, lured into the Masonic orgy, led secretly by Cruise's boss, Sidney Pollock. The film is less a story of a troubled marriage than a dream of manipulation, hypnosis, and ritualized control. The analyist suggested Kubrick utilized Cruise's off screen oblique sexuality (as he was taunted by the gang in the car calling him 'faggot') to further drive home another undercurrent of the film - a man's horror of female sexuality, domination and seduction, fear of death caused by women (the prostitute with AIDS), the bold, perversely sexual daughter of the costumer, even the unrealized yet wild sexual imaginings of his own wife. Homosexuality lurks slightly in the wings, with the hotel front desk man's coquettish worship of Cruise, and the pansexual sex acts of the orgy, leading to a gruesome parallel world of exploitation and murder.
Eyes Wide Shut definitely gets better the more you watch it....

@ That's a great analysis, Anonymous. Kubrick's last film is rather odd and enigmatic, just like Kubrick himself. With EWS, Kubrick said "goodbye" with a bang. Beautiful :)