Oh, I'm Sorry, You Were Saying Something? 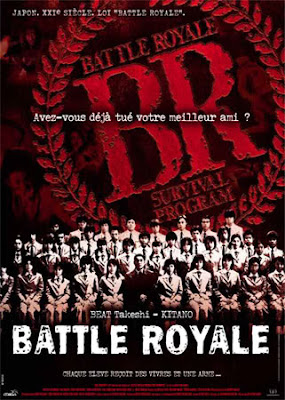 Tagline: Could you kill your best friend?

As per IMDb: In the future, the Japanese government captures a class of ninth-grade students and forces them to kill each other under the revolutionary "Battle Royale" act.

Battle Royale is full of gratuitously violent scenes. The film likes to beat around the bush by showing us lots of blood and dream-like scenes. I don't know if this is a surrealist film, a sport movie, an action film, a romantic drama, or a satire.

Battle Royale has lots of spotty layers in it that some audiences might not understand what it really wants to say. The film is like a mixture of sushi, milk 'n cereal, burger and fries with ketchup, mushroom soup, and half-cooked omelet — all in one bowl. It just makes you want to hurl. There's nothing really wrong about putting different genres in one film (I think it's really creative), as long as you are able to communicate well with the audience.

The screenplay for Battle Royale is like an intermittent Internet connection; sometimes it's connected, sometimes it's not. The plot's progress is slow, most probably because of some pointless scenes; like that scene wherein the students get their bags containing combat weapons. That scene took quite of the film's running time, they should've just cut to the chase. 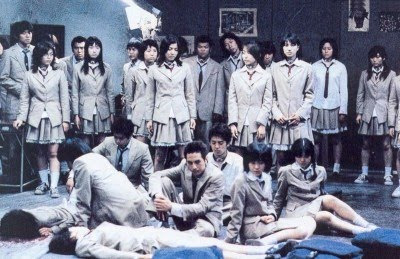 
The characters are okay, but most are not really interesting. The only character that made me want to finish watching Battle Royale is Kawada/Boy #5 (played by Tarô Yamamoto), he has a "tough guy" image, but on the inside he's actually a hopeless romantic. Kawada is a double-sided character, what you see is not what you get. The acting is quite all right, but most are overacted (especially Tatsuya Fujiwara).

Battle Royale has a good musical score (some borrowed); my most fave is the one played during the start of the film. For me, the film's music is an apology for the film's lack of firmness. The film's cinematography was able to parallel what's happening in a scene. Not bad.

My rating: 4/10 - I found the film's violence distracting, it made me want to ask: "What is Battle Royale trying to convey?"

EDIT: 6/10 -  If not for its (unintentional) campiness, Battle Royale could've delivered its message in a clear manner.