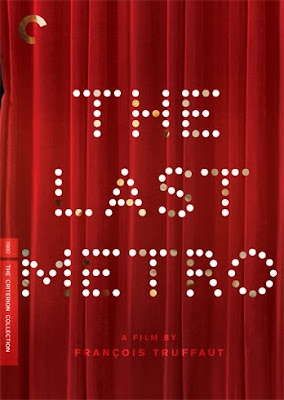 Tagline: A story of love and conflict.


Set in Nazi-occupied France (northern part) during World War II, The Last Metro takes us behind the scenes, or should I say, behind the curtains of one of Paris' favorite theaters, the Montmartre Theatre. The theater's Jewish director, Lucas Steiner (Heinz Bennent), is said to have fled from France to South America in order to avoid capture by the French people connected with the Nazis. Little do most people know that Steiner's wife, actress Marion Steiner (Catherine Deneuve), is hiding him at the theater's cellar.

Meanwhile, Bernard Granger (Gerard Depardieu) is a newly recruited actor at the Montmartre Theatre, he is also connected with the Resistance. The married Marion, who almost rarely see her husband, falls in love with Bernard without her noticing it: "I kissed you on the lips? Certainly not." 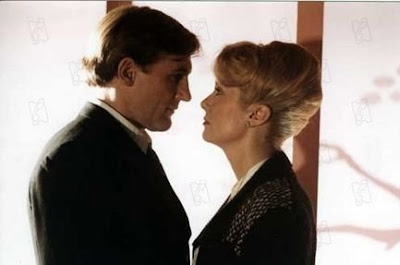 Lucienne Delyle's song, Mon Amant de Saint-Jean, can be heard in some scenes of the film. Here's an excerpt from the song's translated lyrics:

How could I not lose my mind
When he held me prisoner in his arms
I believed in his words of love
He seduced me with his eyes
I loved him so
My handsome man from Saint-Jean
He no longer loves me
It's in the past
Let's talk of it no more.

The last three lines of the song is reminiscent of Lucas slowly losing his wife to Bernard.


Meanwhile, the Montmartre Theatre is threatened by a malevolent force that is Daxiat (Jean-Louis Richard), a French journalist/inspector-general who is well connected with the Nazis. The passionate people of Montmartre Theatre believe that the show must go on, so they do everything they can to save the theater from being taken over by the Nazis — a perfect example of art overcoming adversity.

The film's title refers to the last train in the occupied zone (during the war, Paris was divided into a free zone and an occupied zone). Parisians make it a point not to miss the last metro as much as possible.

Most of the film's scenes were obviously shot in a studio, but you can still feel the ambiance of Paris. Some scenes have a touch of thrill in it and kinda remind me of Alfred Hitchcock's films (e.g., the scene wherein we first see Marion secretly visiting her husband at the theater's cellar). The mood, the shot, the sound of the footsteps, the musical score — so Hitchcock. Truffaut himself was actually a big fan of the Master of Suspense. 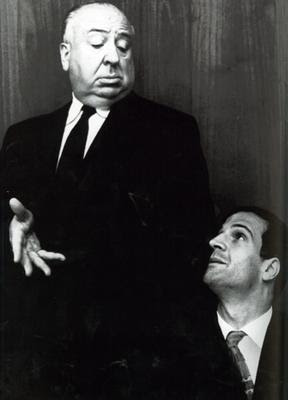 Truffaut and his favorite filmmaker, Hitchcock.


Truffaut also adds a sense of irony with the characters' lines: e. g., Marion telling her husband to calm down when she herself is actually nervous before the play's opening night, a character tells the other person what she really wants to say to herself, the play in this film is called Disappearance — Marion usually "disappears" from the crowd whenever she visits her husband.

Catherine Deneuve, gorgeous as always, plays a former fashion model turned film actress turned theater actress who is torn between two lovers. The Last Metro is also a portrait of a woman who is strong, responsible, authoritative, and is able to always keep her cool. Marion might be strong on the outside, but she's actually vulnerable on the inside because, after all, she's also human. 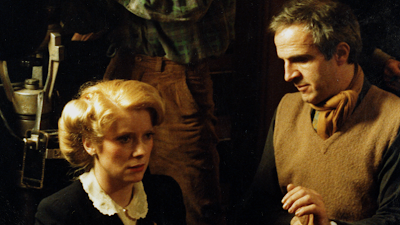 Deneuve and Truffaut on the set of The Last Metro.

Deneuve, Depardieu, Bennent, and the rest of the cast were equally good. They're definitely not a bunch of amateurs.

Truffaut had a big respect to art, and you can see it in his films. He treats his works like his girlfriends. Truffaut tends to make most of his films personal. The 400 Blows and the Antoine Doinel film series were based on his personal experiences.

Truffaut, like Hitchcock, never wanted to spoon-feed his audience. He wanted them to think for themselves. He gives his audience the opportunity to have their own interpretation of the film's ending. He might be compared to Hitchcock, but Truffaut still has a sense of originality — a quality that most of today's filmmakers lack. I guess I could describe Truffaut as a more romantic Hitchcock.

The Last Metro is a film that gets more and more entertaining as you watch it again and again. I actually watched it for approximately ten times in one day. Ha! (Of course I'm kidding.) I'm almost fluent in French now. (Almost.) Thanks to this film.

My rating: 3.5/5 - The Last Metro may not be Truffaut's best, but it's absolutely one of his finest films.


Trailer for The Last Metro:

La Cumparsita - The Most Famous Tango in the World
The famous Tango La Cumparsita was written by uruguaian Gerardo Matos Rodriguez in the year of 1917 in the coffee house La Giralda, Montevideo, Uruguay. Gerardo was 17 years old at the time, and in that moment he could not imagine that he was creating one of the most﻿ famous tango compositions in tango history.

Thanks a lot for subscribing! :)